If you are a fan of Mr. Bennett’s live performances, I recommend that you download the iTunes Festival: London 2010 EP set of six songs, performed live in London. These recordings do not (as yet) exist on any released album. They are, without a doubt, on the top of my favorite cuts of his. Included on the set is:

If you’re not already a fan of his live performances, well, you’re missing something wonderful. Again, try this set for $5.99.
Mr. Bennett is accompanied by Lee Musiker (piano), Gray Sargent (guitar), Marshall Wood (bass) and Harold Jones (drums). The quartet is wonderful–on this EP set as well as in the live performances I’ve seen.

This link will take to you the proper location in ITunes. If you already have this, consider gifting it to a friend.

As soon as this collection was announced, I knew I had to have it. As a latecomer to the music of Tony Bennett, so many of his earlier albums had gone out print. And so I bought myself this wonderful collection for myself. 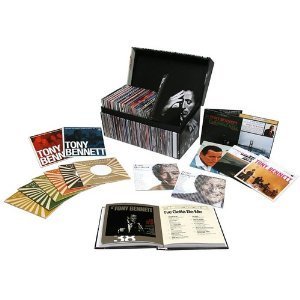 The set contains music from Columbia, Verve, Improv (Tony’s label) and back again to Columbia. There are two CDs of “Rarities, Outtakes and Other Delights” which include a recording of Tony singing “St.  James Infirmary Blues” when he was a member of the 314th Army Special Services Band as World War II wound down. There are six CDs of the singles that he recorded for Columbia, including his first hit “The Boulevard of Broken Dreams”. The set contains 74(!) CDs and 3 DVDs.

As of this past weekend, I have added all 74 CDs to my iPod, where they join other CDs that I’d previously purchased, including the Complete Improv recordings, Jazz, and numerous others. Now the CDs are back to being safe and sound in that beautiful box. Just for kicks: iTunes shows 6.38 GB for Tony Bennett — 1289 items — 2.7 days of listening without repeats.