Tony Bennett is in London:

Just arrived in London. Waiting for @ladygaga to get here. pic.twitter.com/PQbgpszb34

It’s going to be a great couple of shows, I think!

“They All Laughed” was written in 1937 by George and Ira Gershwin for the Fred Astaire and Ginger Rogers movie Shall We Dance. It’s a delightful comic song, with some fun cultural references.

Today’s version is from Cheek To Cheek, released last year by Tony Bennett and Lady Gaga. The terrific arrangement is the great Marion Evans. I am so glad they included this song on their album. I’ve heard Bennett sing it several times in concert and it’s a favorite of mine.

It’s Grammy Day and I am so looking forward to seeing Tony Bennett and Lady Gaga perform on the show tomorrow night. And pick up their award. They are going to be very busy — they also have a concert at the Wiltern tomorrow evening at 9:30, after the awards ceremony.

“They All Laughed,” as well as Cheek To Cheek, is available from iTunes.

Congratulations to Tony Bennett and Lady Gaga on this honor!

I paint everyday but this day is special – celebrating Lady's and my Cheek to Cheek being #1. @ladygaga pic.twitter.com/BgNCKDsCeC

.@itsTonyBennett is the oldest living act to earn a No. 1 album on the #Billboard200: http://t.co/j9n3fOlIkB pic.twitter.com/T0F4JTIQWD

As a subscriber to DownBeat magazine, I get an online preview of the magazine a few days prior to receiving it in the mail. I was very pleased to see these two happy faces on the cover this morning. 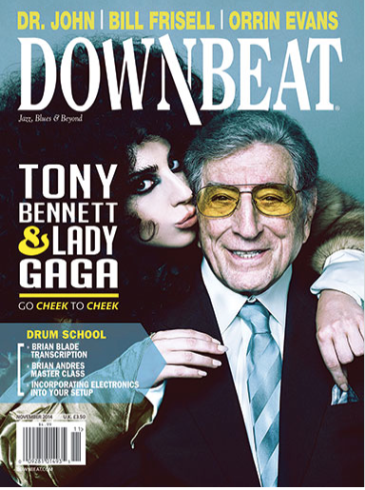 I enjoyed meeting the DownBeat folks at the Monterey Jazz Festival a couple of weeks ago. I love what you do!

George and Ira Gershwin wrote “They All Laughed” in 1937 for the Fred Astaire film Shall We Dance. Tony Bennett regularly sings this song in his concerts.

Tony Bennett has recorded this song three times: in 1968 for I’ve Gotta Be Me and again in 1993 for Steppin’ Out. Today, however, we present the most recent version: 2014 with Lady Gaga for Cheek To Cheek. The fabulous swinging arrangement for the big band is by the great Marion Evans.

Today marks the anniversary of the birth of George Gershwin, who was born on September 26, 1898 as Jacob Gershwine in Brooklyn, New York. He has said to have grown up as an ordinary kid: roller skating, hanging out with his friends and generally enjoying himself. At the age of ten, he attended a violin recital for one of his friends and soon his life became about music. When his parents bought a piano for his older brother Ira, it was Jacob/George who played it constantly. He got his first musical job at the age of 15 as a song plugger for a music publishing company. By 1919, he had composed his first famous song, “Swanee,” sung by Al Jolson. He began writing Broadway musicals in 1920 and began to work with Buddy DeSylva and in 1924, he began working with Ira as his lyricist. Their first hit was Lady Be Good, and they went on to write a string of hits for Broadway and films. At the same time, George, who had been trained classically as a pianist, wrote serious music including Porgy and Bess, An American in Paris, Rhapsody in Blue and other concert pieces.

In 1936, the brothers moved to Hollywood to write for the film industry, starting with Shall We Dance. At that time, he began complaining of severe headaches and suffered from mood swings, poor coordination and olfactory hallucinations. On July 9, 1937, he was working with Yip Harburg on the score for a new film and collapsed. He was rushed to the hospital, where he fell into a coma. It was only then that his brain tumor was discovered and subsequently operated upon. He died on July 11, 1937. He was 38 years old.

“They All Laughed,” as well as the album Cheek To Cheek (Deluxe version), is available from iTunes.