“I Remember You” was written by Victor Schertzinger and Johnny Mercer in 1942 for the movie The Fleet’s In, where it was introduced by Dorothy Lamour and later reprised by Bob Eberle, Helen O’Connell and the Jimmy Dorsey Orchestra. It is said that Mercer wrote the lyric for Judy Garland, with whom he was said to be in love. The song has been widely recorded over the decades and remains popular today. Notable recordings include those by Tony Bennett, Chet Baker, Doris Day, Ella Fitzgerald, Diana Krall and Dinah Washington.

I know I featured this song not too long ago, but a special person requested it and I always honor requests. In her request, she said “I love the way Tony sings this song.” So do I … so do I. The beautiful arrangement is by Johnny Mandel.

http://open.spotify.com/track/3osJ7xPsn1UhfRVDcHN7zf
“I Remember You,” as well as The Art of Romance, is available from iTunes.

“I Remember You” was written in 1941 for the movie The Fleet’s In. The music is by Victor Schertzinger and lyrics by Johnny Mercer. In the film, the song was introduced by Dorothy Lamour, with Bob Eberly, Helen O’Connell and the Jimmy Dorsey Orchestra. It is said that Johnny Mercer wrote the song for Judy Garland, who he was in love with, and presented it to her the day after her marriage to David Rose. True or not, this beautiful song does put one in mind of loves that are lost, but always remembered.

Tony Bennett recorded this song for his wonderful 2004 album The Art of Romance, which is (to this writer anyway), one of his finest albums. The wonderful arrangement is by Johnny Mandel. The album won the Grammy Award for Best Traditional Pop Album.

http://open.spotify.com/track/3osJ7xPsn1UhfRVDcHN7zf
“I Remember You,” as well as the album The Art of Romance, is available from iTunes.

“Tangerine” was written by Victor Schertzinger and Johnny Mercer in 1941 for the 1942 movie The Fleet’s In, which was directed by Schertzinger. The most popular recording of this song was by the Jimmy Dorsey Orchestra, featuring vocals by Helen O’Connell and Bob Eberly.

Tony Bennett recorded “Tangerine” for his 1995 album Here’s To The Ladies.; the liner notes reference Helen O’Connell as the singer most widely identified with this song. The song was arranged and conducted by Jorge Calandrelli; the album was produced by David Kahne.

http://open.spotify.com/track/49IDSL3lYJNMs2lVlDbPRr
“Tangerine,” as well as the album Here’s to the Ladies, is available from iTunes.

I Remember You was written in 1941, with music by Victor Schertzinger and lyrics by Johnny Mercer. 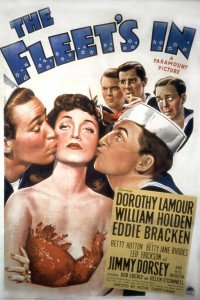 It was introduced in the 1942 movie The Fleet’s In, where it was introduced by Dorothy Lamour, along with Bob Eberly and Helen O’Connell with the Jimmy Dorsey Orchestra.

As you might have already figured out, I can’t go more than a couple of weeks without featuring a Johnny Mercer song. Tony Bennett has only recorded I Remember You once, for his 2004 The Art of Romance.  This album is one of my favorites as is this song. And the cover photo of Mr. Bennett is wonderful!

http://open.spotify.com/track/3osJ7xPsn1UhfRVDcHN7zf
I Remember You, as well as the full The Art of Romance album, is available from iTunes.