Richard Rodgers and Lorenz Hart wrote “I Could Write A Book” for the 1940 Broadway musical Pal Joey. This has always been an interesting song. Today it’s considered a lovely romantic number, but in the context of the musical, it’s sung as a phony love song in order to woo the innocent ingenue. It’s been widely recorded by artists including Frank Sinatra, Rosemary Clooney, Betty Carter, Anita O’Day and Ella Fitzgerald.

Tony Bennett recorded “I Could Write A Book” in 1976 for Tony Bennett Sings 10 Rodgers and Hart Songs. The lovely accompaniment is from the Ruby Braff-George Barnes Quartet, which featured Braff on cornet, Barnes and Wayne Wright on guitar and John Guiffrida on bass. It’s a lovely sound.

“I Could Write A Book,” as well as The Complete Improv Recordings, is available from iTunes.

We’re featuring “I Could Write A Book” to celebrate the 121st anniversary of the birth of the lyricist of the song, Lorenz Hart.

“Blue Moon” was written by Richard Rodgers and Lorenz Hart in 1933. The tune first was used in the 1934 film Manhattan Melodrama, though with a completely different lyric. It has gone on to be one of the great jazz standards, ranking #94 on the Jazz Standards website. The song was recorded by many of the great artists of the 1930s, including Benny Goodman and Ray Noble. It has remained popular up to now and is regularly sung by jazz and cabaret vocalists.

Tony Bennett recorded today’s version of “Blue Moon” in July 1973 at the CBS 30th Street Studios on his own label, Improv, founded after Bennett left Columbia. It was initially released on Tony Bennett Sings 10 Rodgers & Hart Songs. Other songs recorded over the two day long session were released on Tony Bennett Sings More Great Rodgers & Hart. The songs from both albums, as well as alternate versions of many of the songs, is collected on The Complete Improv Recordings, which is available from iTunes and on CD from Amazon. The liner notes for the CD set is wonderful.

For these two albums, Bennett was backed by the Ruby Braff – George Barnes Quartet, featuring Braff on cornet, Barnes and Wayne Wright on guitar and John Guiffrida on bass. No piano and no drums. And completely brilliant. Not only does the sound of the quartet beautifully evoke the sound of the 1930s, the Quartet and Bennett are perfect together. After the pretty rough last months at Columbia, these songs are pure perfection. There’s a wonderful lightness in his voice that I dearly love–when he dances just over the tune. I believe these recordings to be some of Tony Bennett’s finest work.

“Blue Moon,” as well as The Complete Improv Recordings, is available from iTunes. 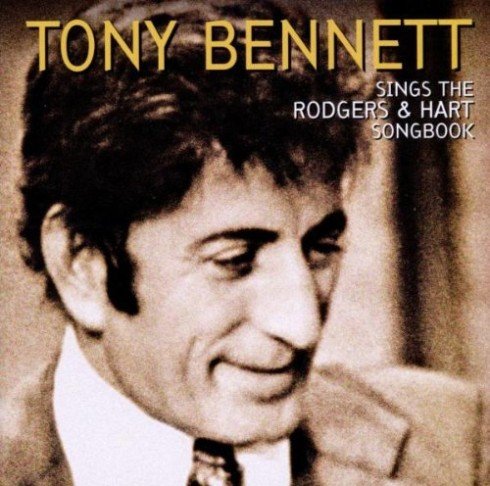 “Thou Swell” was written by Richard Rodgers and Lorenz Hart for the 1927 musical A Connecticut Yankee, based on the Mark Twain novel A Connecticut Yankee in King Arthur’s Court. “Thou Swell” is one of more charming songs from the musical, as the lyrics feature a combination of modern and medieval language: “thine eyes are cute too” and “I’d feel so rich in a hut for two.”

The lyricist of today’s song, Lorenz Hart, was born 120 years ago today on May 2, 1895 in New York. He met Richard Rodgers when they were both college students at Columbia University, where they wrote songs for various college productions. They continued working together up until Hart’s death in 1943. Together they wrote many of the greatest songs in the American Songbook: “Bewitched, Bothered and Bewildered,” “Falling In Love With Love” and many, many more. He stands today as one of the great American lyricists and his lyrics sound more contemporary today than ever.

“Thou Swell,” as well as The Complete Improv Recordings, is available from iTunes.

Since it’s YouTube Saturday here at The Year of Tony Bennett, we leave you a video from Tony and his new touring partner, Lady Gaga … “The Lady Is A Tramp.”

“The Most Beautiful Girl in the World” was written by Richard Rodgers and Lorenz Hart in 1935 for the Broadway spectacular Jumbo. It’s one of the songwriting team’s most popular love songs, with recordings by Frank Sinatra and Perry Como, in addition to Bennett’s very fine recording.

Tony Bennett recorded these songs with the Ruby Braff / George Barnes Quartet, with Braff on cornet, Barnes and Wayne Wright on guitar and John Guiffrida on bass. No drums; no piano: just cornet, guitars and bass. The results were extraordinary. I find these recordings superb; it’s an intimate and focused treatment of these wonderful songs by Rodgers and Hart. And Bennett is in perfect voice for this song as well as all the songs on the album.

http://open.spotify.com/track/3XTwokibF9IHDzl7lumC2u
“The Most Beautiful Girl in the World,” as well as The Complete Improv Recordings, is available from iTunes and Amazon.

Tony Bennett Sings the Rodgers and Hart Songbook is available from Amazon.