The album of the week starting on January 30, 2022, is Basie Swings, Bennett Sings. 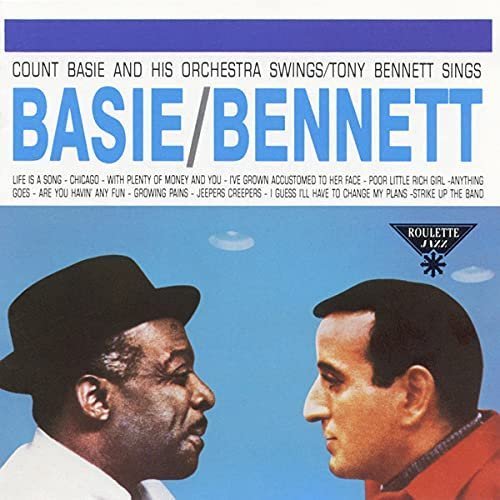 After the relative success of Cloud 7 and The Beat of My Heart, Tony Bennett began to work on his dream of performing with Count Basie and Duke Ellington, whom he viewed as the greatest bandleaders of all time. He was able to work out a deal with Basie to record two albums: one live album on Columbia (details to follow ) and a studio album for Roulette, Basie’s label. This brought up a fight with Bennett’s current producer Mitch Miller, who felt Roulette would tarnish Bennett’s reputation.

Tony Bennett remembers those recordings in his autobiography, The Good Life:

Although I’d talked with him on the telephone I didn’t meet Count Basie until our rehearsals began. It was an amazing experience, the fulfillment of a dream, and I’ll never forget it. We hit it off right away, as though we always knew and understood each other. At one point Basie turned to his band, pointed at me, and said, “Anything this man wants, he gets!” I was floored.

The Roulette half of the two Bennett/Basie sessions is a band singer’s paradise, with the Basie band caught at a robust and swinging peak and Bennett never sounding happier or looser in front of a microphone. The Count himself, alas, appears on piano only on two numbers (“Life Is a Song” and “Jeepers Creepers”), while Bennett’s perennial pianist Ralph Sharon takes over on the remaining ten tracks and does all the charts. Yet Sharon writes idiomatically for the Count’s style, whether on frantic rave-ups like “With Plenty of Money and You” and “Strike Up the Band” or relaxed swingers like “Chicago.” Though not a jazz singer per se, the flavor of jazz is everywhere in Bennett’s voice, which in those days soared like a trumpet. The 1990 CD included an atmospheric unissued Neal Hefti ballad “After Supper,” but even this bonus track does little to extend the skimpy playing time (about 31 minutes) of what is still a great, desirable snapshot from American showbiz of the late 1950s.

You can also listen to Basie Swings, Bennett Sings on