Still needing a bit of Christmas cheer?  We’re happy to pass on the news that Tony Bennett’s Christmas special for Univision is now available to view online!

I saw it and enjoyed it very much. If you missed it in the weekend before Christmas, you can watch it here. 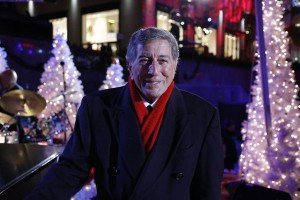 Univision.com will present the worldwide online premiere of the video trailer for Tony Bennett’s forthcoming album release VIVA DUETS. The trailer will offer a sneak peak at the legendary singer’s latest project — including footage of Tony and Chayanne performing his classic hit “The Best Is Yet To Come” as well as an audio clip of his duet with Dani Martin. Univision.com will premiere the trailer at 2 pm EST on Tuesday, August 21 and the broadcast premiere will follow on Univision’s top-rated “Primer Impacto” TV Show at 5:20 pm EST.

Earlier this month, two snippets from the album were premiered exclusively via Tony’s official website. If you haven’t heard them yet, take a listen now:

Audio Snippet of “The Best Is Yet to Come” with Chayanne
https://tonybennett.com/news.php?tb=69

VIVA DUETS will be released worldwide on October 23, 2012 via Columbia Records and is currently available for pre-order at Amazon: http://amzn.to/OptuTc

CURRENT TRACKLISTING FOR VIVA DUETS
“For Once In My Life” with Marc Anthony
“Don’t Get Around Much Anymore” with Miguel Bose
“The Very Thought of You” with Ana Carolina
“The Best Is Yet to Come” with Chayanne
“The Good Life” with Franco DeVita
“Who Can I Turn To?” with Gloria Estefan
“Return to Me (Regresa A Mi)” with Vicente Fernandez
“Blue Velvet” with Maria Gadu
“Just in Time” with Juan Luis Guerra
“Are You Havin’ Any Fun?” with Dani Martin
“The Way You Look Tonight” with Thalia
“Cold, Cold Heart” with Vicentico

TONY BENNETT BIO (ABRIDGED)
With millions of records sold world-wide and platinum and gold albums to his credit, Bennett has received seventeen Grammy Awards — including a 1995 Grammy for Record of the Year for his “MTV Unplugged” CD which introduced this American master to a whole new generation — and the Grammy Lifetime Award. His 2007 prime-time special, “Tony Bennett: An American Classic,” won seven Emmy Awards. His initial successes came via a string of Columbia singles in the early 1950’s, including such chart-toppers as “Because of You,” “Rags to Riches,” and a remake of Hank Williams “Cold, Cold Heart.” He had 24 songs in the Top 40, including “I Wanna Be Around,” “The Good Life,” “Who Can I Turn To (When Nobody Needs Me)” and his signature song,” I Left My Heart In San Francisco,” recorded 50 years ago this coming January 2012. This song garnered him two Grammy Awards. Tony Bennett is one of a handful of artists to have new albums charting in the 50’s, 60’s, 70’s, 80’s, 90’s, and now in the first two decades of the 21st century. He has introduced a multitude of songs into the Great American Songbook that have since become standards for pop music. He has toured the world to sold out audiences with rave reviews whenever he performs.