The song of the day for Tuesday, December 25, 2018, is “A Child Is Born.”
Today is the twelfth day of The Twelve Days of a Tony Bennett Christmas.

“A Child Is Born” was written in 1969 by Thad Jones, whose younger brother, Elvin, was a noted jazz drummer. Thad Jones was a member of the Count Basie Orchestra starting in 1954. He left the orchestra in 1963 to pursue a career as an arranger and studio trumpet player and later moved to Denmark. “A Child Is Born” is his best-known composition; the wonderful lyrics are by Alec Wilder.

A Child Is Born (alternate take 7) – alternate, a song by Tony Bennett, Bill Evans on Spotify

“A Child Is Born,” as well as The Complete Tony Bennett/Bill Evans Recordings, is available from iTunes.

I received DownBeat magazine yesterday and learned about an exciting new release of The Complete Tony Bennett / Bill Evans Recordings on 180-gram vinyl. 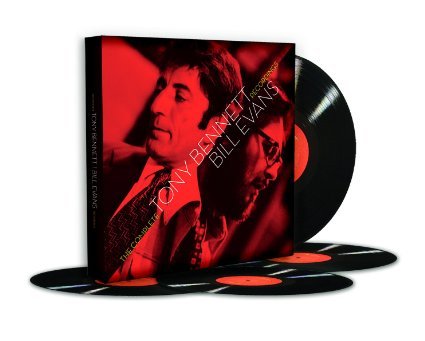 The box set consists of 4 LPs: the two original albums, plus 2 LPs of bonus tracks. It also includes a 12-page booklet with photos and the excellent Will Friedwald liner notes.

The box set is available for pre-ordering from Amazon and will be released on April 28, 2015. It’s not inexpensive at $110, but if you have the right equipment and, perhaps, a nice tax refund coming your way, it’s probably worth the price.

“Who Can I Turn To” was written by Leslie Bricusse and Anthony Newley for the 1969 musical The Roar of the Greasepaint — The Smell of the Crowd. Although Shirley Bassey made the initial recording of this song, it was Tony Bennett’s version that charted and helped to bring the musical to Broadway, where it had a good run.

Today’s version is an alternate version (specifically take #6) from the 1977 album by Tony Bennett and Bill Evans: Together Again. While I completely understand why this version was not the one chosen for the initial release of Together Again, I find a great deal of goodness in these alternate versions, if for no other reason that in listening to the version initially released along with the alternate versions, we begin to get a feel for the level of experimentation and improvisation that went on between these two great artists during these recording sessions.

http://open.spotify.com/track/4v8H0VmQ5ovzOuOTY6miEm
“Who Can I Turn To,” as well as The Complete Tony Bennett Bill Evans Recordings, is available from iTunes.