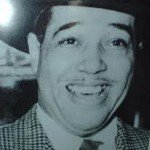 I’ve been in a Duke Ellington mood all day and so the Song of the Day for August 9, 2012 is In A Sentimental Mood, written by Edward Kennedy Ellington in 1935. Lyrics were written later Irving Mills and Manny Kurtz. It may be one his most-recorded songs; it certainly is one his most-loved songs. In fact, I can’t remember not ever knowing and loving this song.

This is from Tony’s 1999 album Bennett Sings Ellington: Hot and Cold. The personnel on this album is staggering. The Ralph Sharon Quartet (Ralph Sharon, Gray Sargent, Paul Langosch, and Clayton Cameron) are featured, as well as an orchestral charts arranged and conducted Jorge Calandrelli, the Argentinian composer, conductor, and arranger and big band charts arranged and conducted by Ralph Burns (though the big band wasn’t used on this particular song). The album is definitely worth careful listening.