“How Do You Keep The Music Playing?” was composed in 1982 with music by Michael Legrand and lyrics by Alan and Marilyn Bergman. This song was written for the 1982 movie Best Friends, which starred Burt Reynolds and Goldie Hawn. The initial recording was a duet by Patti Austin and James Ingram, which became a hit single in 1983. It was one of three songs with lyrics by Alan and Marilyn Bergman that were nominated that year for an Academy Award for Best Song (though the award went to “Up Where We Belong” from the movie An Officer and a Gentleman). The song has become a popular standard and has had many fine recordings, including those by Frank Sinatra (who encouraged Bennett to sing this song), Frankie Laine, Johnny Mathis, Tony Bennett, Tony Bennett and George Michael, and Tony Bennett and Aretha Franklin.

Tony Bennett recorded this version of “How Do You Keep The Music Playing?” in September, 2016 for the taping, in front of a live audience, of the recently aired television special Tony Bennett at 90 on NBC.

Here’s a nice photograph of Tony and all four of his children on the red carpet: 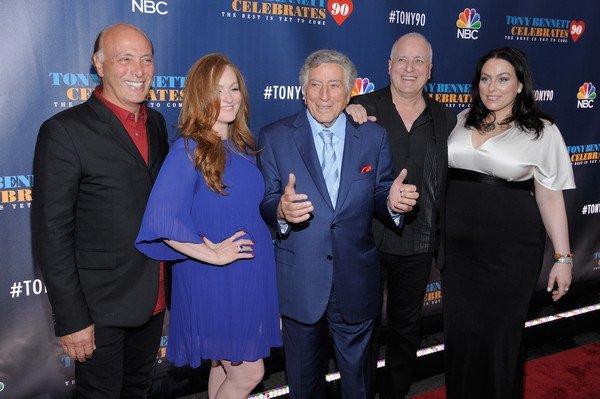 I have start off by saying that I absolutely adore this song, as I do just about all the songs with lyrics by Alan and Marilyn Bergman. Tony recorded it originally for his 1986 album The Art of Excellence and I fell in love with the song instantly. I had the great fortune to hear him sing it live in Seattle in 2007. My mother was living in a nursing home at that time; I stopped by there on my way up to Seattle to check in on her. We talked about the concert and about Tony Bennett for a while and, as I was leaving, she said “He really sends you, doesn’t he?” I replied “Yes, he sure does.” And still does.

I think this recording of “How Do You Keep The Music Playing?” is his finest. I hope you enjoy it too.

How Do You Keep the Music Playing?

Listen to How Do You Keep the Music Playing? on Spotify. Tony Bennett · Song · 2016.

“How Do You Keep The Music Playing?” as well as Tony Bennett Celebrates 90, is available from iTunes.

The Song of the Day for Thursday, November 29, 2012 is Watch What Happens.

About Watch What Happens

Watch What Happens was written for the 1964  Les Parapluies De Cherbourg (The Umbrellas of Cherbourgh) by Michael Legrand, with lyrics by the film’s screenwriter, Jacques Demy. Norman Gimbel wrote the English lyrics.

This version is from Tony Bennett’s wonderful 1965 album If I Ruled The World: Songs For The Jet Set and was arranged and conducted by Don Costa. The Ralph Sharon Trio ,with Hal Gaylor on bass and Billy Exiner on drums, was featured on the album, as was Al Cohn on tenor saxophone. Ernie Altschuler produced the album.

Mr. Bennett’s recording of Watch What Happens was included on a later release of the soundtrack that included several bonus tracks of jazz interpretations of songs from the film. The soundtrack is available on Amazon.

Watch What Happens, along with the album If I Ruled The World: Songs For The Jet Set, is available from iTunes.