“All The Things You Are” was written by Jerome Kern and Oscar Hammerstein for the 1939 musical Very Warm For May. In American Popular Song, Alec Wilder considers it to be one of Kern’s finest songs and with good reason. It’s a beautiful tune and Hammerstein’s lyrics are excellent.

Tony Bennett recorded this version of “All The Things You Are” for the 2015 album The Silver Lining – The Songs of Jerome Kern, with Bill Charlap. The album won the Grammy Award for Best Traditional Pop Vocal Album.

All The Things You Are

“All The Things You Are,” as well as The Silver Lining – The Songs of Jerome Kern, is available from iTunes.

Today we remember the remarkable Oscar Hammerstein, who was born on July 12, 1895 into a renowned theatrical family. In spite of that familial background, his father didn’t want his son to enter “the business,” and Oscar studied law at Columbia University. Thankfully, the call of the theater won and gave us one of America’s most distinguished lyricists and playwrights.

Hammerstein found early success with Jerome Kern and their 1927 Show Boat, which was a huge hit then and has spawned two film versions many significant revivals. (Show Boat was the first live musical your author saw. at Theater Under the Stars in Atlanta, Georgia starring Joe Brown as Captain Andy. I can trace my love of theater and the American songbook to that show–I couldn’t have been more than ten years old.) Hammerstein continued his association with Kern and they co-wrote many fine songs, including today’s song.

In 1943, Hammerstein found his second great collaborative partner: Richard Rodgers. Rodgers’s lyricist, Lorenz Hart, was suffering from severe alcoholism as Rodgers began work on the adaptation of the play Green Grow the Lilacs. Rodgers chose Hammerstein to work with him and the result was the groundbreaking musical Oklahoma. The pair went on write many musicals together: South Pacific, The King and I and The Sound of Music, among others. They partnered until Hammerstein’s death in 1960 from stomach cancer.

Hammerstein was also a mentor to the young Stephen Sondheim, who was their neighbor in Bucks County, Pennsylvania. Sondheim’s parents were separated and Hammerstein was a father to “Stevie.” In fact, it was Hammerstein who convinced Sondheim to write the lyrics for West Side Story.

The Year of Tony Bennett is proud to honor the memory of the great Oscar Hammerstein.

Tony Bennett announced today that The Silver Lining – The Songs of Jerome Kern will be released on September 25, 2015! The album features the pianist Bill Charlap as well as his wife, Renee Rosnes (on piano duet pieces), Peter Washington (bass) and Kenny Washington (drums). 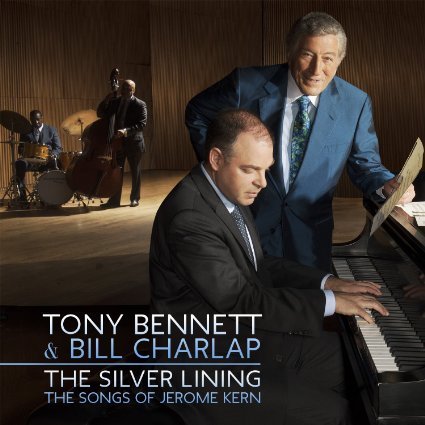 The album includes these songs:

The Silver Lining – The Songs of Jerome Kern is available for pre-order from amazon.com.