“Maybe September” was composed by Percy Faith with lyrics by Jay Livingston and Ray Evans. It is from the only movie that Tony Bennett acted in (so far), The Oscar, where he played the good guy, an agent named Hymie Kelly. While the film received mixed reviews, this song is terrific and is beautifully sung by Tony Bennett.

Tony Bennett recorded “Maybe September” in 1965 and released it in January 1966 on The Movie Song Album. He also recorded the song again in 1976 for his second album with Bill Evans, Together Again.

I just finished watching this year’s Academy Awards and knew I had to feature Bennett’s song from The Oscar as the song of the day. Alas, I’ve never seen this movie and keep on hoping that it will turn up on television some day.

We were blown away tonight by Lady Gaga’s performance of the medley of songs from The Sound Of Music. When Julie Andrews came out and hugged her after she finished, we were so happy and thrilled for Lady. What an amazing talent she is. Will she be on Broadway next? I wouldn’t be surprised one bit!

Song from "The Oscar" (Maybe September)

“Maybe September,” as well as The Movie Song Album, is available from iTunes.

On the ninth day of a Tony Bennett Christmas, Monday, December 22, 2014, he sings for us “Silver Bells.”

“Silver Bells” was written in 1950, with music by Jay Livingston and lyrics by Ray Evans. Lyricist Ray Evans says that the song was originally called “Tinkle Bells.” That is, until composer Jay Livingston told his wife about the new song and she reminded him that the word ‘tinkle’ had a another meaning and so it was changed to “Silver Bells.” It was first recorded in 1950 by Bing Crosby and Carol Richards.

http://open.spotify.com/track/3IFdgovo2BeNChD2DWBh7H
“Silver Bells,” as well as A Swingin’ Christmas, is available from iTunes.

Today’s song, “Maybe September,” was written in 1965 for the movie The Oscar by Percy Faith with lyrics by Jay Livingston and Ray Evans. The Oscar is the only movie that Bennett has acted in. He played one of the few good guys in the movie, an agent named Hymie Kelly. While the film received mixed reviews, this song is terrific and is beautifully sung by Tony Bennett.

Tony Bennett recorded “Maybe September” in 1965 for The Movie Song Album. The song was arranged by Larry Wilcox and conducted by Johnny Mandel. This album is one of Bennett’s favorite of his albums and includes great Bennett hits including “The Shadow of Your Smile,” “Emily,” “Days of Wine and Roses” and “Smile.”

Song from "The Oscar" (Maybe September)

“Maybe September,” as well as The Movie Song Album, is available from iTunes.

Note: Yes, I know it’s Saturday and there’s no video. There will be one tomorrow!

This song is from the 1966 film The Oscar, which starred Stephen Boyd and Elke Sommer and co-starred Tony Bennett as Hymie Kelly, whose memories of the lead character served as the narration of the film. This song was written by Percy Faith, with lyrics by Jay Livingston and Ray Evans. I’ve never seen the film; alas, it not available on DVD. It does show up on Turner Classic Movies from time to time … I’ll try to keep an eye on their schedule and give everyone a heads up if and when it is shown again.

As today is the last day of September, it seemed time to feature this song. Today’s recording is from Bennett’s 1966 The Movie Song Album; it was arranged by Larry Wilcox and conducted by Johnny Mandel. Bennett also recorded this song in 1977 with Bill Evans for Together Again.

http://open.spotify.com/track/3NxRVqbwByRGvlo6Sb1ISF
“Maybe September,” as well as The Movie Song Album, is available from iTunes and amazon.com.

On the Ninth Day of Tony Bennett Christmas, Saturday, December 22, 2012, the song of the day is Silver Bells. 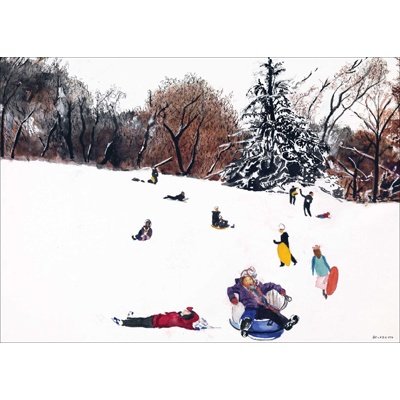 Originally, composers Jay Livingston and Ray Evans wanted to call their song \”Tinkle Bells.\” Fortunately, Mr. Livingston\’s wife pointed out the alternate meaning of \”tinkle\” and so the song became Silver Bells. It was first recorded by Bing Crosby and Carol Richards in October 1950.

Silver Bells, as well as the full A Swingin\’ Christmas album, is available from iTunes.