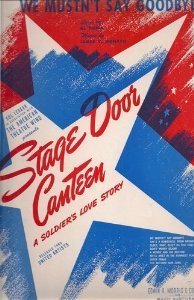 This song was written by James Monaco and Al Dubin in 1943 for the film Stage Door Canteen: A Soldier’s Love Story. This film consisted mostly of celebrity cameos and filmed musical numbers, though there was a bit a plot having to do with a volunteer falling in love with one of the departing soldiers.  My late mother used to tell me stories about the young men she knew going off to war: how many of them married before they left to fight and how some of them never returned. Films like Stage Door Canteen were instrumental in helping promote morale among those serving in World War II as well as their families and loved ones who waited for them to come home.

Tony Bennett sang We Mustn’t Say Goodbye for his 1960 album To My Wonderful One.

http://open.spotify.com/track/5VTXd3rAWd56SySnd0y6kS
We Mustn’t Say Goodbye, as well as the full album To My Wonderful One, is available from iTunes.