Richard Rodgers and Larry Hart wrote “I Wish I Were In Love Again” for the 1937 musical Babes in Arms. It was a favorite song of Judy Garland, who recorded it in 1940. Other recordings include those by Tony Bennett, Ella Fitzgerald, Frank Sinatra and Audra McDonald.

Your author is hopelessly enchanted with the lyrics for this song. I just love the music of Rodgers and Hart.

Today we have three versions of today’s song. The first two are from Bennett’s own label from the 1970s, Improv, and the wonderful recordings of the songs of Rodgers and Hart with the Ruby Braff / George Barnes Quartet, recorded in 1973. These 1973 recordings always seem completely in the period they were written in. Compare these two to our third version, recorded in 1992 for Perfectly Frank. This version is more urbane. Lots to listen to here.

I Wish I Were In Love Again

“I Wish I Were In Love Again,” as well as The Complete Improv Recordings, is available from iTunes.

“I Wish I Were In Love Again (Alternate Take #1),” as well as The Complete Improv Recordings, is available from iTunes.

I Wish I Were In Love Again

“I Wish I Were In Love Again,” as well as Perfectly Frank, is available from iTunes.

The music for “Reflections” was written by Duke Ellington as a piano solo titled “Reflections in D” in 1953. The lyrics, written by Milton Raskin and Marjorie Houseman, were added later.

The piano solo was recorded by Bill Evans in 1978 at a concert at Carnegie Hall, released that year on the album New Conversations.

Tony Bennett recorded “Reflections” for the first album released on his own Improv label, Life Is Beautiful. It was arranged by Torrie Zito and features Zito on piano, Chuck Hughes on drums and John Guiffrida on bass.

http://open.spotify.com/track/6gRs3mGqP2QjF6sZ5Uz4Y4
“Reflections,” as well as all of the songs collected on The Complete Improv Recordings, is available from iTunes.

And, if you’re interested, here is Ellington playing it himself, as recorded in April, 1953. It’s a beautiful piano solo by a great artist.

Listen to Reflections In D on Spotify. Duke Ellington · Song · 1989.

And, finally, Bill Evans from 1978 on New Conversations.

“Thou Swell” is one of Rodgers and Hart’s earlier songs, written in 1927 for A Connecticut Yankee. Based on the Mark Twain novel A Connecticut Yankee in King Arthur’s Court, the musical concerns a young man about to be married who dreams that he is part of the court of King Arthur in the year 528.  The lyrics cleverly play with both the old and new language: thou and swell; thine eyes are cute too; I’d choose a sweet lollapaloosa in thee.

Your song of the day chooser obviously has her favorites and returns to them often: Harold Arlen, Johnny Mercer, “The Rules of the Road,” and Rodgers and Hart. Between repeated playings of the new Bennett/Brubeck: The White House Sessions, Live 1962 all week, she has been listening to a lot of Rodgers and Hart and was reminded that not only is “Thou Swell” a charming song, but that Tony Bennett’s recording of it is rather swell too.

The two Rodgers and Hart albums were the first albums that Bennett created on his own Improv label after leaving Columbia.  Not only are they wonderful songs, but the George Barnes / Ruby Braff Quartet with Bennett’s voice is perfect. The unusual quartet featured two guitars (Barnes and Wayne Wright), cornet (Ruby Braff) and bass (John Guiffrida). No piano, no drums, no strings, no reeds. For this author, Bennett is at his very best when he sings with small, intimate groups (as on these albums and the 1964 When Lights Are Low with the Ralph Sharon Trio and the 1961 Tony Sings For Two, with just Sharon on piano). There is a purity in these albums and Bennett’s ever-present exploration and commitment to the emotional content of the songs he sings is enhanced. Tony: thou swell, thou witty, thou grand. 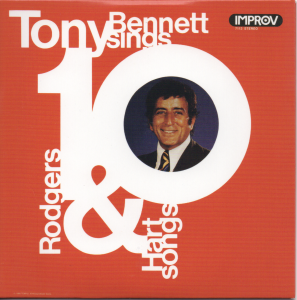