This lovely 1932 song by Walter Donaldson was quite popular at time, with recordings by George Jessell and Rudy Vallee, among others. Tony Bennett relates in his autobiography The Good Life, that his father used to sing this song to him and his brothers and sisters when they were children.

Tony Bennett recorded “My Mom” in 1998 for his album The Playground, featuring songs for children. The lovely piano accompaniment is from Ralph Sharon.

“My Mom,” as well as The Playground, is available from iTunes.

Today’s song, ” My Mom,” was written in 1932 by Walter Donaldson. It was quite popular at that time and was recorded by George Jessell and Rudy Vallee, among others.

Tony Bennett recorded “My Mom” in 1998 for his children’s album The Playground, which was produced by Tony Bennett and his oldest son Danny Bennett. The Ralph Sharon Quartet is featured, with Sharon on piano, Paul Langosch on bass, Gray Sargent on guitar and Clayton Cameron on drums. Tony Bennett remembered in his autobiography The Good Life that his father used to sing this song to his children. 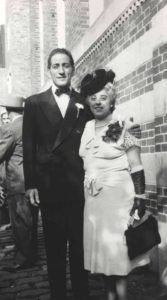 Tony Bennett has always spoken quite lovingly about his mother. His father died when Tony was only ten, and even with the help of relatives, his mother had three children to raise and support, which she did by sewing dresses for a penny a dress. Bennett relates this in The Good Life:

My Mom kept working all day at the factory, and as before, she did piecework all evening. We’d meet her every night at the subway station so that she wouldn’t have to carry that big bundle of dresses by herself, and in the morning we’d do the same thing in reverse.

Even though she got paid by the dress, she’d sometimes pick one out and throw it aside. When I asked her why she did that, she told me, “I only work on quality dresses.” She wasn’t intentionally teaching me a lesson about integrity, but many years later, when producers and record companies tried to tell me what songs to sing, in the back of my mind I could see my mother tossing those dresses over her shoulder. This has always been my inspiration for insisting on singing nothing but great songs.

“My Mom,” as well as The Playground, is available from iTunes.