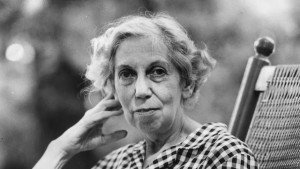 Originally titled “Dreamy Blues,” Ellington wrote this song in 1930, which is based on a theme by Barney Bigard, who is said to have learned it from his New Orleans clarinet teacher, Lorenzo Tio. Ellington wrote the song specifically for “microphone transmission” and it was first played on a 1930 radio broadcast. Audiences loved the song, and so Irving Mills wrote the lyric, changing the name of the song to “Mood Indigo.” The song has been widely recorded by instrumental and vocal artists, including Tony Bennett, Charles Mingus, Ella Fitzgerald, Thelonious Monk, Frank Sinatra, and Nat King Cole.

You may have noticed that we have been playing a lot of Ellington lately. About six weeks ago, I picked up a book called Meanwhile There Are Letters, the Correspondence of Eudora Welty and Ross Macdonald. I came to the book as a fan of Eudora Welty, whom I had met in the late 1970s when I lived in Jackson, Mississippi. Welty and the mystery writer Ross Macdonald were fans of each other and began exchanging letters in 1970 until Macdonald’s death from complications of Alzheimer’s Disease. In writing these letters, Welty and Macdonald fell in love, though because Macdonald was married and because Welty was a lady, that love remained in their letters. As I said, I entered the book as a fan of Welty and along the way became a fan of Ross Macdonald. Ross loved jazz, as did Eudora, and he especially loved Duke Ellington’s music. And so I’m in a Duke Ellington kind of mood.

If any of you are interested in Ross Macdonald, I’ve started a website on him and his novels at seekingrossmacdonald.com. It’s not nearly complete, but you might find it interesting.

Oh, and a news flash: the 4th Annual Twelve Days of a Tony Bennett Christmas will start on December 14.

The song of the day for

“Blues in the Night” was written in 1941 for the film of the same name by Harold Arlen and Johnny Mercer. Arlen wrote the music first and wrote a true blues song. Johnny Mercer, who later wrote the lyrics, drew on his southern heritage to write the exceptional blues lyrics.

In addition to our love for the music of Tony Bennett, we are big fans of the writer Kenneth Millar–whose pen name was Ross MacDonald–and this was his favorite song. Millar was true jazz fan and loved the American songbook. In a letter to his friend Eudora Welty, who had just seen a review of George Gershwin songs at the New Stage Theater in Jackson, Mississippi (where your author was the resident set and lighting designer once upon time), he wrote

I’m glad to hear of the celebration of Gershwin. He and Cole Porter and Ellington were the great celebrators and deserve to be celebrated. The other night, for the first time in three years (since Linda [his daughter] died) I got out some Ellington records and played them.

An author of hard-boiled crime novels after my own heart.

“Blues in the Night,” as well as The Beat of My Heart, is available from iTunes.

For our Saturday video, we present this clip from the film Blues In The Night.