The songwriter of the month for March 2016 is Jimmy Van Heusen. 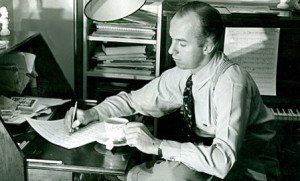 He was born Edward Chester Babcock on January 29, 1913 in Syracuse, New York. He began playing piano at an early age, which he much preferred to traditional schooling. In fact, he was expelled from high school in 1928 for a prank he played during a school assembly; a year later he was expelled from a seminary for being a degenerate, having been caught hanging around poolrooms.

His musical career began at the age of 15, when he landed a job as a part-time disc jockey for a radio station. The station manager insisted that he change his name. He looked out the window and saw an advertisement for Van Heusen men’s shirts, and the first name of James or Jimmy came soon after. In spite of using that name professionally for the rest of his life, he never had it changed and was officially known as Edward Chester Babcock. His stint as a disc jockey gave him a real understanding of the construction of popular songs, and he began composing at that early age.

He did attend Syracuse University for two years in the early 1930s, where he studied piano and composition. During that time, he formed a friendship with Harold Arlen’s brother, Jerry Arlen. Arlen was happy to recommend Jerry and Van Heusen for jobs both on the east coast and in Hollywood, a wonderful assist for his burgeoning career. He moved to New York, got a job as a waiter and worked on getting recognized as a composer. Like many young composers of his time period, he worked as a staff pianist for various music publishers, which served to draw attention to his skills. By 1938, he met Jimmy Dorsey and together they composed a song, “It’s The Dreamer In Me,” that was recorded by Dorsey’s orchestra. That same year, he began to parter with lyricist Eddie De Lange, with whom he worked for several years. Van Heusen and De Lange got their big break in 1940 to compose the score for Swingin’ The Dream, an adaptation of Shakespeare’s A Midsummer Night’s Dream, which featured Louis Armstrong as Bottom. The song “Darn That Dream” was a hit for Benny Goodman and was widely recorded, including a very fine version by Billie Holiday.

In 1940, Van Heusen teamed up with Johnny Burke, a relationship that lasted many years. They were asked to composed for the first of the Bing Crosby-Bob Hope “road” movies: The Road to Singapore, released in 1941. Bing Crosby’s recordings of their songs in this 1940s brought great attention to the pair; the songs from that period include “Birds of a Feather, “It’s Always You” and one of my personal favorites “Swinging on a Star.” 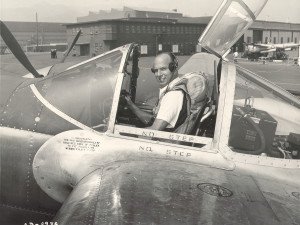 During this period of writing a long string of hit songs, Van Heusen also helped out in the war effort. He toured with Crosby to help sell war bonds and, using his given name, also worked at Lockheed as a test pilot for bombers being sent to the front. Apparently, Lockheed had no idea of Babcock’s other job, while Paramount Studios, had no idea that Van Heusen had another job! His shift at Lockheed started around 4:00 am and he was done by noon, when he would report to Paramount.

After the war, Van Heusen and Burke continued to write for both Hollywood and Broadway, in spite of Burke’s failing health, which did not allow Burke to work in 1954 and 1955. Due to contractual issues, Van Heusen was only able to publish his songs under a pseudonym. After the contract was finally terminated, Van Heusen teamed up with Sammy Cahn and began the second stage of his career where he partnered frequently with Frank Sinatra, both professionally and as a friend. Van Heusen and Cahn began to collect awards, including Oscars for The Tender Trap and The Joker’s Wild, which starred Sinatra, as well as an Emmy for their score of Thornton Wilder’s Our Town. The partnership with Cahn included Broadway musicals, songs for singers including Sinatra, Paul Anka, Lena Horne, Nat “King” Cole, and Sammy Davis, Jr.

Van Heusen, who was quoted as saying “I dig chicks, booze, music and Sinatra — in that order,” remained a bachelor until 1966. He retired in 1970 and visited his homes in California and New York. He died in 1990, from complications of a stroke. He left us with an amazing collections of songs that are still popular today.