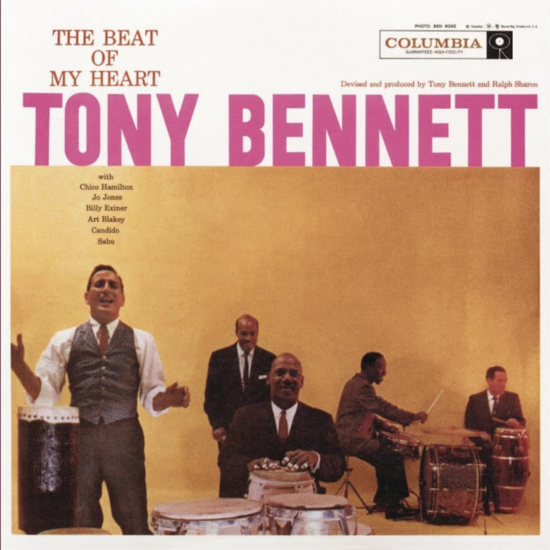 The Beat of My Heart was conceived and planned by Tony Bennett and his new musical director, Ralph Sharon. Bennett wanted to return to his jazz roots with this, his third LP. Bennett relates stories about this album in his autobiography, The Good Life:

Ralph and I wanted to make a jazz statement in a big way, and I came up with the idea of recording an album of standards that put the spotlight on different kinds of rhythm by using all the great jazz drummers I could find. We talked the concept over during our first few months on the road, and gradually it all came together. The first recording date was in June 1957, with Chico Hamilton. I was delighted with the results, particularly with the tongue-twisting. super-percussive title track, “The Beat of My Heart.” Mitch came to the first recording date, but was unusually quiet. Maybe he hoped he was giving us enough rope to hang ourselves. But when the album came out, an army of jazz fans said, Hey, this guy knows how to swing. A whole new audience accepted me—in fact, I still get my biggest reactions at jazz festivals the world over.

Listen to The Beat of My Heart

You can also listen to The Beat of My Heart on:

Irving Berlin wrote “Let’s Face The Music and Dance” in 1936 for the movie Follow The Fleet, where was introduced by Fred Astaire. It’s one of Berlin’s most popular songs and has been recorded many times by artists including Tony Bennett, Nat King Cole, Natalie Cole, Barbara Cook, Ella Fitzgerald and Frank Sinatra.

Today’s version is from Tony Bennett’s wonderful 1957 jazz album The Beat of My Heart. For this album, Bennett chose the finest percussionists in the world for the songs on the album, including Art Blakey, Sabu, Jo Jones, Chico Hamilton and Candido Camera. This was also his first album with Ralph Sharon and Ralph Sharon Trio, with whom he would work for many years.

Candido Camera is why we chose this song today, as today is his 92nd birthday. Candido was born in Cuba on October 22, 1912. He is one the world’s preeminent conga drum players. He played on several songs on this album; he also appeared with Mr. Bennett in his 1962 Carnegie Hall concert and he and Bennett turned in an exceptional performance of “De Glory Road.”

The Year of Tony Bennett wishes Candido a very happy birthday and best wishes for many more.

http://open.spotify.com/track/5B9bcn6bpoAWbLnyQrlVvw
“Let’s Face The Music and Dance,” as well as the album The Beat of My Heart, is available from iTunes and Amazon.