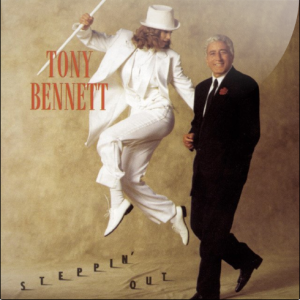 Stepping’ Out (CK 57424) was released by Columbia on October 5, 1993. The album was produced by David Kahne, with Danny Bennett as executive producer. Bennett is accompanied by the Ralph Sharon Trio on this album, with Doug Richeson on bass and Clayton Cameron on drums. Tony Bennett and Ralph Sharon arranged all the songs on this album. The album went gold in the US and won the Grammy Award for Best Traditional Pop Vocal Performance.

This album features some of the greatest songs from the American songbook, all of which were introduced by Fred Astaire. In the mid-1970s, Tony Bennett moved to Los Angeles, as he describes in The Good Life:

But the greatest thing about living in L.A. was the chance to get to know two of my biggest idols, Ella Fitzgerald and Fred Astaire. Fred was well over seventy by the time we got acquainted, but he was still very active. Every morning he’d take his daily constitutional, and he’d walk right by my house. He was so graceful he actually looked like he was floating as he strolled by.
…
Fred told me that he was no longer athletic and that he only acted and wrote songs these days. We were sitting in a little art studio I had, completely separate from the rest of the house, and listening to the local jazz station. I had to go back to the main house to answer the phone. When I returned, I caught Fred Astaire dancing to a song on the radio. It was tremendous. He stopped as soon as he saw me and his face turned red. He asked me who was singing the blues, and I told him Big Joe Turner. Fred said, ‘It’s always been that way. When I hear the right beat, I just have to dance.’

Next to listening to Tony Bennett sing, watching a Fred Astaire film is as good as gets for this reader. I hope you enjoy our look at this great album and the songs on it. Oh yes, fair warning: I think there will be a lot of YouTube videos this month.