“Without a Song” was written 1929, with music by Vincent Youmans and lyrics by Billy Rose and Edward Eliscu, for the musical Great Day. It has been recorded by artists ranging from Perry Como to Mario Lanza to Frank Sinatra. Great Day was set in 19th century Louisiana; as a result some of the lyrics have been changed over time to remove language that is now considered objectionable.

Tony Bennett first recorded “Without a Song” in 1956 for the album Tony; he sang it again in 1962 at his Carnegie Hall concert. Today, we’re featuring his 1958 recording with Count Basie and His Orchestra for the album In Person!

“Without a Song,” as well as In Person!, is available from iTunes.

Recently, your Year of Tony Bennett bloggers (all two of us) watched a wonderful documentary called A Great Day In Harlem, directed by Jean Bach and released in 1994. It was her very first film and was nominated for Best Documentary for that year. Ms. Bach, who was a great jazz fan and knew many jazz musicians in New York, decided to make a film about the great 1958 photograph by Art Kane for Esquire magazine. Simply, the word was put out to the jazz community to show up at the unreasonably early hour of 10:00 AM at a particular intersection in Harlem to have their picture taken. And show up they did. 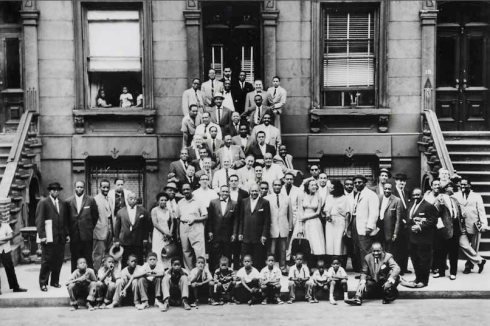 This film is a must-see for any jazz fan. It not only documents the process of creating the photograph, it also includes interviews with several of the musicians, including Dizzy Gillespie and Marian McPartland, and plays a lot of music from the late 1950s as well. You can rent the disc from Netflix and it’s available as well from Amazon.com. And be sure to watch the extra DVD features — they’re great too.

After viewing this film twice (and I’m not returning it until the copy I ordered from Amazon arrives), I knew I had to feature a song featuring one of the greats from this photograph and so today it’s Jimmy Rushing.

Jimmy Rushing, who wrote “Undecided Blues,” was one of the great blues performers and composers. The first recording of the song was made in January, 1941 with Count Basie.

Tony Bennett recorded “Undecided Blues” for his 2001 album Playin’ With My Friends. Most of the songs on this album are duets, but there are several solo songs and this is one of them. If you’re a Bennett fan and like the blues, I encourage you to check out this album; Tony Bennett can really sing the blues.

http://open.spotify.com/track/24GVJ7Mx7Jh6g0EL8k77oz
“Undecided Blues,” as well as the album Playin’ With My Friends: Bennett Sings The Blues, is available from iTunes.