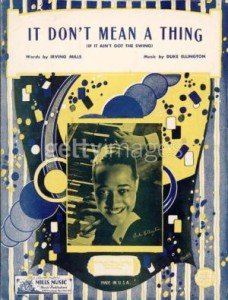 “It Don’t Mean a Thing (If It Ain’t Got That Swing)” was written in 1931 by Duke Ellington, with lyrics by Irving Mills. This song was one of the first songs to use the word “swing” in the title and this song certainly defined what it meant to swing. Ellington recorded the song with Ivie Anderson on vocals and it was an immediate hit. It has been widely recorded since it was written and the song is a lot of fun to play and to listen to. Significant recordings include those by Louis Armstrong, Django Reinhardt, Gigi Gryce, Tony Bennett and Thelonious Monk.

Today’s version is from the Grammy Award-winning album Cheek To Cheek, released in 2014 by Tony Bennett and Lady Gaga. The arrangement is by Marion Evans.

The Year of Tony Bennett congratulates Tony Bennett and Lady Gaga on winning the Grammy for Cheek To Cheek. We couldn’t be happier for you! Have a wonderful tour!

“It Don’t Mean A Thing,” as well as the Grammy Award-winning album Cheek To Cheek, is available from iTunes.