The Year of Tony Bennett is proud to honor Cole Porter as the songwriter of the month for June 2016.

Cole Porter was born on June 9, 1891 to a wealthy family from Peru, Indiana. His mother encouraged him musically, and as a child he studied both piano and violin. While he was quite good with both instruments, he disliked the sound of the violin and concentrated on music. He studied hard and was a proficient pianist in his teens.

His grandfather wanted Cole to follow in the family business and wanted the young man to become a lawyer. With the in mind, he sent him to prep school in Massachusetts; Porter brought an upright piano with him. He did well in school, though, and was the class valedictorian. He entered Yale in 1909, majoring in English, minoring in music and also studying French. While at Yale, he wrote several student songs, some of which are still sung today. He wrote scores to several student musicals while at Yale as well. He did enroll in the law school at Harvard, but was encouraged by the dean of the law school to switch to the music school, where he continued his studies in classical music.

By 1916, he had two productions that had made it to Broadway, though they were flops and only ran for a short time. Porter moved to Paris at the beginning of World War I and, some say, volunteered with relief organizations and possibly joined the French Foreign Legion. That said, he lived in Paris, quite lavishly on his share of the family fortune, and was well-known for his scandalous parties. Though Porter’s homosexuality had become more open while a student at Yale, he was completely out as gay during this period. In 1918, he met Linda Lee Thomas, a wealthy divorcee from Louisville, Kentucky and they were married in 1919 and stayed married until Linda’s death in 1954.

In the early 1920s, Cole began to take his music more seriously, mainly due to Linda’s belief in his talent, and began to write.

In 1928, he returned to Broadway with the musical Paris, which was a big hit for him, which contained two of his more famous songs: “Let’s Do It” and “Let’s Misbehave.” In the late 1920s and 1930s, he was continually on Broadway, including Gay Divorce in 1932, Fred Astaire’s last stage show before Hollywood called. One of his early great hits was Anything Goes, starring Ethel Merman.

In 1937, Porter had a terrible riding accident, where his horse rolled over on his and crushed his legs. While the doctors wanted to amputate his right leg, Linda fought adamantly to save it, afraid that he’d never return to writing music again. As soon as possible, he returned to work, but the rest of his life was a series of crippling pain and several dozen surgeries.

In the 1940s, he began writing for Hollywood, which paid well but wasn’t a cultural success. But he returned to Broadway in full force, with a string of hits: Kiss Me Kate, Can-Can and Silk Stockings.

After losing both his mother and Linda over a two-year period, he began to slow down. By 1958, the right leg finally had to amputated; he never wrote another song after that. Porter died in 1964 while in California, due in large part to the doctors not properly understanding the seriousness of his addiction to alcohol. 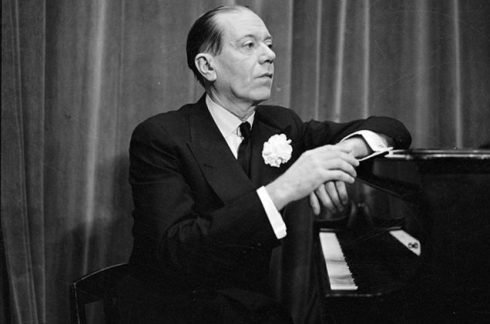 The songs he wrote remain popular and are sung today by popular, jazz and cabaret artists. Ella Fitzgerald’s Cole Porter Songbook is a masterpiece, of course. Other major Porter recordings include Frank Sinatra Sings the Select Cole Porter, Anything Goes: Stephane Grappelli and Yo-Yo Ma, and Red Hot + Blue.

For more information about Cole Porter and his body of work, please visit Cole Wide Web.