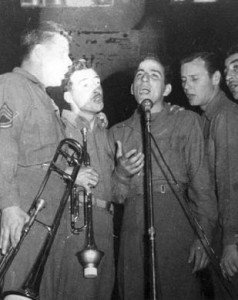 St. James Infirmary has an interesting background in history. Though often credited to songwriter Joe Primrose (a pseudonym for Irving Mills), it is actually an anonymous American folksong, based on the 18th century English folk song called “The Unfortunate Rake” and sometimes “The Young Man Cut Down In His Prime.” The title of the song as sung in America is derived from St. James Hospital in London, which treated leprosy.

The song was made famous by Louis Armstrong in 1928. The song was also performed and heavily associated with Cab Calloway. It’s been recorded by jazz and blues artists, including King Oliver, Lead Belly, Big Mama Thornton, Billy Holiday, Dizzy Gillespie and late 20th century blues performers Janis Joplin and Paul Butterfield, as well as The Doors.

Tony Bennett has recorded this song twice and we present both of those versions here today.

While serving in the US Army in Germany, Tony Bennett sang with an Army band. His earliest existing recording was made in 1946 while in the Army: St. James Infirmary. The song was popular with the soldiers and Mr. Bennett, known as Joe Bari, says in his biography that it was one of his most often-requested songs.

Our second recording of St. James Infirmary is from 1994, nearly 50 years after this first recording. They are both good recordings and it’s interesting to hear them in conjunction.