While the partnership of Richard Rodgers and Oscar Hammerstein II probably comes to mind when people first think of Hammerstein, Oscar Hammerstein was nearly 50 before he and Rodgers wrote Oklahoma. Prior to that, he had teamed with composers including Jerome Kern (Showboat in 1927), Vincent Youmans, Rudolf Friml and Sigmund Romberg. Not only a lyric writer, Hammerstein usually wrote the book for the musicals he collaborated on. 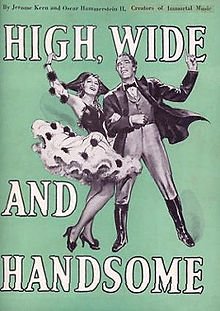 Today’s song, The Folks That Live On The Hill, was written in 1937 with Jerome Kern for a movie called High, Wide and Handsome, where it was introduced by Irene Dunne. It was recorded that same year by Bing Crosby. Peggy Lee also recorded the song in 1957 on her album The Man I Love.

Tony Bennett recorded this song on his 1990 autobiographical album Astoria: Portrait of the Artist. The song is quite touching in the context of the arc of the album: the young man returning home after World War II, exploring his past, planning his future and dreaming of what life might bring.

http://open.spotify.com/track/38kABxg7jKSRBo1Yd5V7k5
The Folks That Live On the Hill, as well as the entire Astoria: Portrait of the Artist album, is available from iTunes.