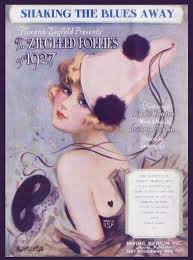 Irving Berlin originally wrote “Shaking The Blues Away” for The Ziegfeld Follies of 1927. It was introduced by Ruth Etting, who was making her first appearance in the Follies. Berlin pulled it out of the trunk for 1948 film Easter Parade, where it was a dance number for Ann Miller.

Shakin" The Blues Away

“Shaking The Blues Away,” as well as Bennett/Berlin, is available from iTunes.