On the fifth day of a Tony Bennett Christmas, Wednesday, December 18, 2013, the song of the day is “Santa Claus is Coming To Town.”

Written by the songwriting team of J. Fred Coots and Haven Gillespie, “Santa Claus is Coming To Town” had a spectacular debut. The song was first sung on Eddie Cantor’s radio show in November, 1934. On the day after the broadcast, there were 100,000 orders for the sheet music; by Christmas, over 400,000 copies of the sheet music had been sold. 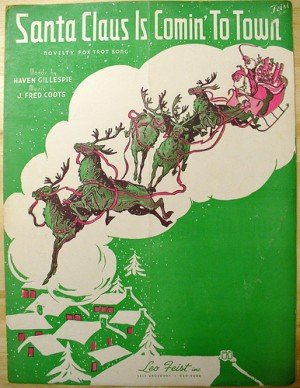 Today’s version of “Santa Claus is Coming to Town” is from Tony Bennett’s 2008 album A Swingin’ Christmas, featuring The Count Basie Big Band. This album is a favorite of ours, as it not only contains a number of great swinging Christmas songs, there are also some very nice ballad-type Christmas songs as well.