The Year of Tony Bennett would like to honor all of our mothers and those of us who are mothers. We also recognize those of us whose mothers live on in our hearts.

My Mom was written by Walter Donaldson in 1932. Donaldson was one of the great Tin Pan Alley songwriters. His works include How Ya Gonna Keep ‘Em Down on the Farm (After They’ve Seen Paree)?, Makin’ Whoopee, My Blue Heaven, Yes Sir, That’s My Baby, and Carolina in the Morning. 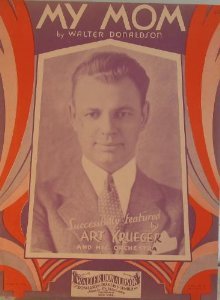 Tony Bennett recorded My Mom for his charming 1998 children’s album, The Playground. However, this sweet song had been a part of his life since his very early childhood. In his autobiography, The Good Life, he relates:

My father inspired my love for music. He derived tremendous pleasure from singing to anyone who would listen, jut like he did when he was a child. He had a beautiful voice. He used to sit on the front stoop of our house and sing a capella to by brother and me, in the gentle, sensitive voice that I can still hear. He loved Italian folk songs and he used to sing one song written the twenties called My Mom, which has always had a very special meaning for my brother and me.

Bennett has written movingly about his mother in both The Good Life and his recent Life is a Gift. After the death of his father when Tony was only ten, his mother supported her three children sewing dresses a penny a dress.

We were desperate for money, but she couldn’t bring herself to do something that she felt was beneath her. “I only do quality dresses,” she would say. “I’m not going to work on a bad one.” Many years later, I realized that this was the attitude I held toward my job, too. She became my inspiration on singing only quality songs.

Happy Mother’s Day to us all.

http://open.spotify.com/track/14jvlTXvbS6wb38nXJun5Z
My Mom, as well as The Playground album, is available from iTunes.