Written by Jule Styne (music) and Betty Comden and Adolph Green (lyrics), “Just In Time” is just one the great hits from the 1956 Broadway musical Bells Are Ringing. The stars of the show, Judy Holliday and Sydney Chaplin introduced the song. Tony Bennett recorded it that same year, and it was a big hit for Mr. Bennett. “The Party’s Over,” another song recorded by Mr Bennett (Hometown, My Town in 1959) was the other major hit song from this wonderful score.

Tony Bennett has recorded “Just In Time” several times in his career. Today’s version comes from his legendary 1962 concert at Carnegie Hall. It was arranged by Ralph Sharon, who also conducted the orchestra for the concert.

“Just In Time,” as well as Tony Bennett At Carnegie Hall, is available from iTunes.

Mr. Bennett has recorded “Just In Time” many times. However, his most important performance of this song was never recorded. 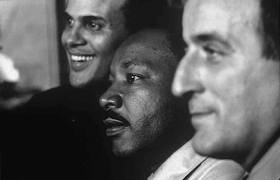 Starting on March 21, 1965, Tony Bennett marched with Martin Luther King, now-Congressman John Lewis, Ralph Bunche, Billy Eckstine, Leonard Bernstein and many, many others on the Third March from Selma to Montgomery, Alabama. On the evening of March 24, 1965, 50 years ago today, on a makeshift stage (created with coffins loaned by a local mortuary), a Stars for Freedom rally and concert was held. In addition to Mr. Bennett, the performers included Harry Belafonte, Frankie Laine, Sammy Davis, Jr. and Peter, Paul and Mary. He “Just In Time” and for the American Civil Rights movement, it was indeed just in time. As a result of the marches from Selma to Montgomery, President Johnson introduced and Congress passed the Voting Rights Act, major battle in the Civil Rights movement.

The Year of Tony Bennett honors Mr. Bennett for his life-long battle again racism and for freedom and equality for all. Thank you.

CNN did a nice interview with Tony Bennett and Harry Belafonte a few years ago about the march, which you may enjoy.