“Don’t Cry Baby” was written in 1929 by James P. Johnson, Saul Bernie, and Stella Unger. Jimmy Johnson was a composer and pianist who, along with Jelly Roll Morton, came into prominence in the era between ragtime and the stride piano techniques in early jazz. Saul Bernie and Stella Unger were both composers who were active in the 1920s. It was first sung by Bessie Smith in 1929. Erskine Hawkins recorded it in 1943; this version reached #1 on the Harlem Hit Parade in 1943 and #15 on the popular charts. Etta James recorded it in 1961 as well.

Your friendly author was 12 days old on the date of this recording, seen here with my mother: 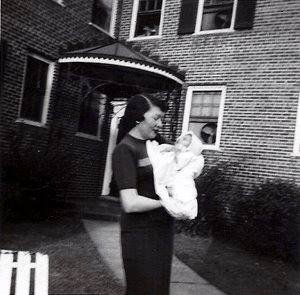 “Don’t Cry Baby,” as well as the singles collected on The Columbia Singles, Vol. 1 is available on Apple Music.