As part of Harold Arlen Week at The Year Of Tony Bennett, the song of the day for Tuesday, February 12, 2013 is A Sleepin’ Bee.

About A Sleepin’ Bee

In 1954, Harold Arlen collaborated with Truman Capote on the musical House of Flowers, based on the Capote novella of the same name. This production marked the Broadway debut of Diahann Carroll; the cast also included Pearl Bailey, Alvin Ailey, Geoffrey Holder, and Ray Walston. 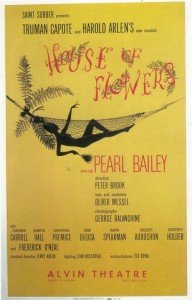 Arlen wrote the music for the production; he and Capote wrote the lyrics. Out of the show came two songs that quickly became jazz and popular standards: Don’t Like Goodbyes and today’s song, A Sleepin’ Bee.

Today’s version is from Bennett’s remarkable 1961 album Tony Sings For Two, with Tony accompanied only by pianist Ralph Sharon.

A Sleepin’ Bee, as well as the full album Tony Sings For Two, is available from iTunes.