“Just In Time” was written in 1956 by the same songwriting team as yesterday’s song (“Make Someone Happy”): Jule Styne, Adolph Green and Betty Comden. The song was written for the 1956 musical Bells Are Ringing, where it was introduced by Judy Holliday and Sidney Chaplin. Holliday and Dean Martin sang it in the 1960 film version of Bells Are Ringing. I happened to catch the film Bells Are Ringing are few months ago was impressed not only by the great score by these greats, but the book and and the performances of Dean Martin and Judy Holliday. If you ever do have the chance to see this film, I think you’d enjoy it.

Today I’m featuring Tony Bennett’s first recording of “Just In Time,” from 1956. It was released as a single and was later included on Bennett’s 1962 album Mr. Broadway: Tony’s Greatest Broadway Hits. It’s a great song and this version is my favorite. It was arranged by Percy Faith.

“Just In Time,” as well as Mr. Broadway: Tony’s Greatest Broadway Hits, is available from iTunes. 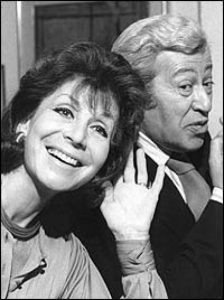 Today, the Year of Tony Bennett remembers the great lyricist, screenwriter and performer Betty Comden on the 100th anniversary of her birth on May 3, 1917. She was partnered with Adolph Green for six decades. Together they wrote the lyrics to musicals, including those by Jule Style and Leonard Bernstein. They also wrote for film, including one of Hollywood’s greatest movies, Singin’ In The Rain, which starred Gene Kelly, Donald O’Connor, and a very young and very lovely Debbie Reynolds.

For those of you have time, I’m including the episode of Theatre Talk, which honored Betty Comden soon after her death on November 23, 2006.

The history of popular music in the 20th century was written mostly by men, but Betty Comden, along with Dorothy Fields, were incredibly talented exceptions to that rule.

Happy birthday, Ms. Comden. Thanks for all the songs and films.