The song of the day for Friday, January 4, 2013 is Honeysuckle Rose. 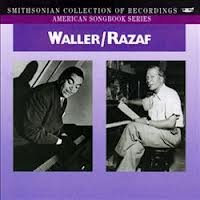 This song was written in 1929 by Fats Waller (music) and Andy Razaf (lyrics). It was introduced in the 1929 revue Load of Coal. It came to be one of Waller’s and Razaf’s most beloved songs. It took the song a few years to take off, but the Fletcher Henderson recording of 1933 was a hit and the song became a standard for jazz and popular singers. Waller’s 1934 recording was inducted to the Grammy Hall of Fame in 1999.

In his tribute to the great American female singers, Here’s To the Ladies (1995), Tony Bennett chose this song to pay tribute to Lena Horne, who sang this song regularly in her concerts. Honeysuckle Rose was arranged and conducted by Jorge Calandrelli. The Ralph Sharon Trio with Mr. Sharon on piano, Doug Richeson on bass and Clayton Cameron on drums was featured on the album.

Honeysuckle Rose, as well as the full Here’s To The Ladies album, is available from iTunes.