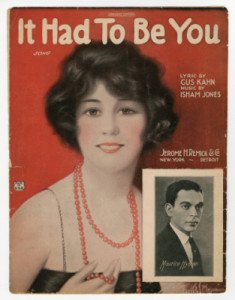 “It Had To Be You” was written in 1924, with music by Isham Jones and lyrics by Gus Kahn. This song is a popular standard with many fine recordings, including those by Paul Whiteman, Cliff Edwards and Frank Sinatra. It has also be used in several fims, such as Casablanca and Annie Hall.

Tony Bennett has recorded this song several times, including his second album, Tony in 1956, his 1994 MTV Unplugged Concert and the 2011 duet with Carrie Underwood for Duets II.

Today’s version is from one of my favorite albums: When Lights Are Low, released in 1964. This album features great standards, good jazz, and Tony singing with the Ralph Sharon Trio, with Hal Gaylord on bass and Billy Exiner on drums. It’s a terrific album and this is one of my favorite songs, since childhood, and this recording is really lovely.

It Had To Be You

“It Had To Be You,” as well as When Lights Are Low, is available from iTunes.