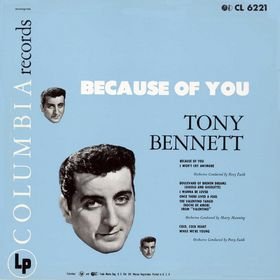 This song was written in 1940 by Arthur Hammerstein (uncle of Oscar Hammerstein II) and Dudley Wilkinson. The song was used in the 1951 film I Was An American Spy.

Because Of You was the first song of Tony Bennett’s to reach #1 on the Billboard charts. In his autobiography, The Good Life, Mr. Bennett relates this story:

By the spring of 1951, I was told that if I didn’t get a hit soon I’d be dropped from the label. I went into Percy’s (Percy Faith) office and he said, “In this next session you really have to deliver. We have only three songs ready, so we need another song.” I remember that he looked through a bunch of sheet music on his desk, grabbed a song, and said, “Well, let’s do this one.” That song was “Because Of You.” I was doing a lot of dramatic singing on my early records like “Sing You Sinners” and “Boulevard” but Percy said to me, “Just relax. Use your natural voice and sing the song.” I took his advice.

Because Of You became Tony Bennett’s first hit song. It started getting a lot of play on jukeboxes and the momentum grew and it became popular on radio as well.

Listeners from all around the country began calling local radio stations and requesting “Because Of You,” and it reached number one on the Billboard magazine’s pop chart on June 23, 1951. It stayed on the chart for thirty-two weeks–ten weeks at number one. I finally had my first major hit record.

The song was recorded on April 4, 1951. It was arranged and conducted by Percy Faith and produced by Mitch Miller.

Because Of You, as well as Columbia Singles: Volume 1, is available from iTunes.