The musical collaborator of the month for July 2017 is producer Mitch Miller. 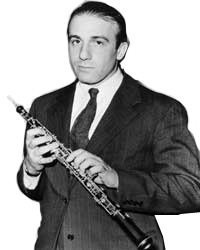 As a child, I can remember watching Sing Along With Mitch on television and I’m guessing a fair number of the readers of the blog remember that as well. Miller was a classically trained oboist, who started work in the record business in 1940 at Mercury Records in their classical music division. In 1950, he joined Columbia where he hired two new young artists: Rosemary Clooney and Tony Bennett.

I think many of us, myself included, have a love-hate viewpoint towards Mitch. On the one hand, he had the good sense to sign Tony Bennett to the label, sight-unseen, based on Bennett’s demo recording of “Boulevard of Broken Dreams.” On the other hand, though, he and Bennett had well-known disagreements about the kinds of songs Miller wanted him to record.

This month, we’ll be looking at some of these earl