By the time the stock market crashed in 1929, Duke Ellington found himself and his orchestra still playing at the Cotton Club. He had also signed a contract with Irving Mills in 1927, which proved to be beneficial as the Great Depression began to take hold. With his radio exposure as well as excellent representation by Mills, Ellington was able to survive in the worsening economy. He and his orchestra began a series of tours throughout America.

Duke Ellington was not only very popular in the United States, he had developed a significant following in the United Kingdom and Europe following tours overseas in 1933 and 1934. In addition to this popularity, he found a new appreciation from classical European composers and musicians for the quality of his longer compositions. presaging the long-form compositions he would later be known for. He had started his study of modern classical music in 1929, including Delius, Debussy and Ravel.

In the mid-1930s, the swing music landscape was full of great artists: Benny Goodman, Chick Webb, Count Basie, Tommy Dorsey, Jimmy Dorsey and many more. Swing was the new form. Ellington and his orchestra certainly could swing, but they also had a deeper, less commercial sense than straight-forward swing bands. At this time, he began to focus on jazz compositions for different sized groups and focusing on individual musicians including Johnny Hodges and Cootie Williams.

Some of Ellington’s most beloved songs were written in the 1930s, including Mood Indigo, It Don’t Mean A Thing (If It Ain’t Got That Swing), Sophisticated Lady, Solitude, and Caravan. 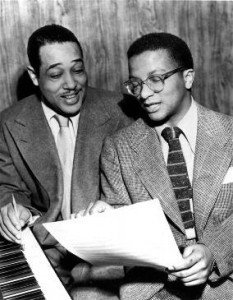 In 1939, he formed one of his most important and long-lasting creative relationships with Billy Strayhorn, with whom he worked until Strayhorn’s death in 1967. Strayhorn had trained in classical music and he provided Ellington with an even deeper understanding of classical forms. Out this grew one of Ellington’s first longer compositions, Black, Brown and Beige from 1943.

As the war ended, new forms in jazz had started taking hold, especially the new bebop sound, as exemplified by Dizzy Gillespie. As a pre-Swing jazz performer, many thought Ellington’s music felt dated. And as the 1950s dawned, the new R&B started taking audiences away from all jazz artists. Still, Ellington was able to survive, due in large part to the royalties from his compositions and a series of one-night stands on the road.