The Songwriter of the Month for February 2016 is Harold Arlen.

He was born on February 15, 1905 in Buffalo, New York to Samuel and Celia Arluck. His mother gave birth to twins, but only Harold survived. He was given the name Hyman. His father was a noted cantor in Buffalo and was the resident choir director at the Pine Street synagogue. It was at the synagogue that young Hyman was able to explore his musical talents. He began piano lessons at age 9 and composed his first song at the age of 12. Though he was taught classical piano, he loved jazz and began to collect jazz records. 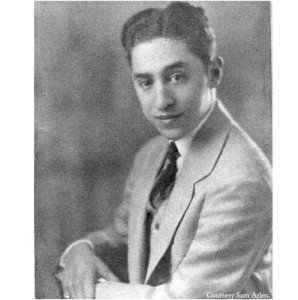 At 15, Hyman formed his first band, The Snappy Trio, which played in the Buffalo area and even in its red light district. They were quite successful, to the point that young Hyman, at the age of 16, was able to buy his own Model T automobile. To his parent’s dismay, he dropped out of high school. The Snappy Trio expanded into a five-piece group called The Southbound Shufflers in 1923. It was around then that he was known as Harold Arluck. His success and fame as a pianist and composer continued to grow and bring offers of employment. He also met a male dancer from Boston named Ray Bolger, who became a lifelong friend. Throughout the rest of the 1920s, he grew as a performer (both piano and singing) as well as composing and arranging. Composer Harry Warren heard him play and connected Harold with the lyricist Ted Koehler.

The first song that Arlen and Koehler wrote was “Get Happy,” which was a great harbinger of the talent of that team. (Judy Garland fans may remember her performance of “Get Happy” in the 1950 film Summer Stock; that performance amazes me each time I watch it.)

In 1930, Arlen and Koehler began to write music for the Cotton Club. Some of the songs they wrote in those years include “I’ve Got The World On A String,” “Stormy Weather,” “Let’s Fall In Love” and “I’ve Got a Right To Sing The Blues.”

In the mid-1930s, Hollywood called and Arlen signed a contract with Samuel Goldwyn to write songs for Strike Me Pink. After that film, he signed with Warner Brothers and began his partnership with Yip Harburg, with whom he wrote many great songs including “Last Night When We Were Young.” They stayed busy writing for film. 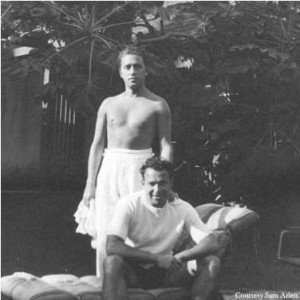 In 1938, MGM signed Arlen and Harburg to write the score for The Wizard Of Oz, which resulted in their writing one of the greatest film songs of all time: “Over The Rainbow” for Judy Garland.

Arlen continued to work in Hollywood and found another lyrics partner in Johnny Mercer, with whom he wrote many of his greatest songs: “Blues in the Night” and “One For My Baby (And One More For The Road).” The team also wrote for Broadway productions of Bloomer Girl (1944) and St. Louis Woman (1946). 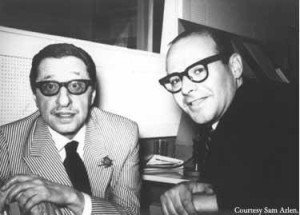 1952 marked another of Arlen’s great successes: A Star Is Born, which starred Judy Garland. With lyricist Ira Gershwin, he wrote one of his greatest songs: “The Man That Got Away.” He returned to New York to work with Truman Capote on the dramatization of the Capote story House of Flowers. Arlen began to have some health problems in the late 1950s; he was also greatly affected by the death of his mother.

Though Arlen continued to write during the rest of his life, he was not a happy man. His wife, Anya, died of a brain tumor in 1970. Around that time he was diagnosed with Parkinson’s Disease and became a recluse.

Harold Arlen died of cancer on April 23, 1986 at the age of 81. He was one the greatest songwriters this country has ever had and his songs are sung by jazz, popular and cabaret singers in great numbers.

For more information about the life and music of Harold Arlen, please visit The Official Harold Arlen Website, maintained by his son Sam Arlen. 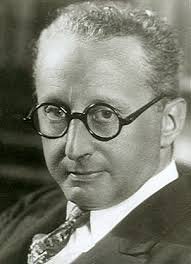