Today is October 22 and that means that Viva Duets is officially released!

If you don’t have time to make it to the store, you can download it now from iTunes.

The Year of Tony Bennett gives this album four thumbs up: two from me and two from my co-blogger.

In the documentary film The Zen of Bennett, Tony Bennett says “I like what I do. And my ambition is to get better as I get older. That’s what I’m about really.”

In Viva Duets, Tony Bennett makes good on that. At 86, he sounds as good as ever on this album. After a series of several very successful duets albums with British and American singers, he now collaborates with the greats of Latin music, representing artists from Europe, South America, Central America, Puerto Rico, and the United States.

If I had to just use one word for this album, that word would be joy. The relationships between Tony Bennett, most of whom he had never worked with, are a joy to hear and I suspect that sense of joy in the music was present in the recording studio. Nothing on this album is forced; it sounds as fresh as new, as if Tony Bennett were recording it for the first time.

Apart from one song, each of the songs on this album are standards that Mr. Bennett has recorded and performed for most of his career. The album starts with The Best Is Yet To Come, sung with Chayanne, shines the light on the swinging arrangements to come.

While all of the songs are wonderful, there are a few that deserve special mention.

The Way You Look Tonight, with Thaliá, with its sensitive and evocative guitar work by Gray Sargent, is one of my favorite songs on the album. Thaliá and Mr. Bennett sing this song as if they’ve been singing it together forever; both singers sing with a light, easy touch that serves the song well. Sung in both English and Spanish, this song is a hit.

Regresa A Mi (Return To Me) is my candidate for the best song on this album. The arrangement of this popular standard, made famous by Dean Martin, is quite exceptional and the singing with Vicente Fernández is even greater. If one didn’t know the original, you would have to assume that the album included this lovely old Ranchero-style song on an album of standards. These two great singers are each legendary throughout the world and this performance of these two great men is a once-in-a-lifetime experience.

The Year of Tony Bennett highly recommends this album highly. 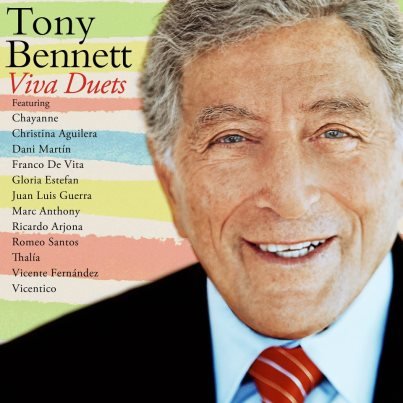 The video of the Tony Bennett – Marie Gadú duet of Blue Velvet has been released!

Blue Velvet will be available on the Target release of Viva Duets as well as the iTunes version. You can preorder these versions now.

Tony Bennett and Christina Aguilera have released a preview of their song from Viva Duets, Steppin’ Out With My Baby.

It’s a terrific, upbeat arrangement of a great song by Irving Berlin, introduced in the film Easter Parade and famously sung and danced by Fred Astaire.

Head on over to Soundcloud to hear the song.

Today, we are treated with the video release of Cold, Cold Heart from the upcoming Viva Duets album, with Tony Bennett and Vincentico, with great guitar work from Gray Sargent: