Tonight is the annual gala for ETA. Looks like a great event for an even greater cause.

This fall has two (and hopefully three) major releases for Tony Bennett fans. And two can be pre-ordered right now.

The Year of Tony Bennett has been writing extensively about this upcoming album. Go to Music on the menu and select Viva Duets to read about the artists on the album.

Viva Duets can be pre-ordered from Amazon. 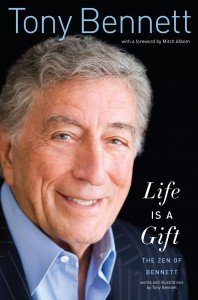 This book sounds wonderful. On the Facebook page for the book:

… the iconic, award-winning vocalist offers a rich and varied collection of stories that capture hilarious, heartwarming, and moving moments from his remarkable sixty-year career.

The book is available for pre-order from Amazon and Barnes and Noble, as well as other retailers in both print and e-book formats.

Collectors and fans might also be interested in this offering from Premiere Collectibles: an autographed copy of the book.

As you may know, the documentary film The Zen of Bennett premiered at the Tribeca Film Festival this spring. It has also been screened at the Sydney Film Festival, the Tuscan Sun Festival, Michael Moore’s Traverse City Film Festival and the Hamptons International Film Festival. The film is expected to be announced in DVD via Netflix. No dates are available. All fingers at the Year of Tony Bennett are crossed for a fall release as well.

In the meantime, the trailer for the film is really wonderful and is available on the film’s website at www.zenofbennett.com.

I’ve thought long and hard about an appropriate way to wish Mr. Bennett a happy birthday that both acknowledges what his music and art means to me and hopes for his happiness in life going forward.

Then today in the car I was listening to National Public Radio’s Talk of the Nation program, which today featured Dr. Ellen Langer, a psychologist from Harvard, who was speaking about her new book, Counter Clockwise: Mindful Health and the Power of Possibility and her previous book Mindfulness.

In this half-hour program, which includes call-ins, she discusses her research on living mindfully and the health benefits that it brings to people. She believes that as we all age, the more we are able to live in the moment, in the “now”, the less our minds and bodies age and the younger we stay. Her study of with the group of older men in their 80s (back, she says, when 80 meant 80, not the 60s like it does now), that the group who lived in the moment began to grow younger before her eyes: arthritic fingers began to straighten, they stood taller, and generally looked much younger at the end of the two-week study than they did before.

I have often thought about how remarkable Tony Bennett is at this age. He exhibits eternal youth and joy and wonder when I’ve seen his live performances in the last year; he’s always smiling and always has a spring in his step that I envy, even though I’m twenty-four years his junior. In the Seattle concert I attended in December, 2011, the woman seated next to me (a complete stranger) turned to me at one point and said “he’s like a little boy who just did something wonderful and is incredibly pleased and amazed.” And sure enough, Tony Bennett was standing there with his hands on his hips and a big smile on his face at the close of that song.

But in hearing listening to Dr. Langer, it all became clear. He does live in the “now” and is always present in the moment, whether he is on stage or painting. This is the clear definition of mindfulness and is a major tenet of Zen practice. The Zen of Bennett isn’t just a phrase;  it’s a true reflection of how he seems to live his life. In her writings and in the interview, Dr. Langer talks about the importance of noticing new things, “paying attention to variability” in life, living in the moment.

As a musician and a painter, Mr. Bennett does this each and every day. I’ve heard him live four times (and it will be seven times by the end of September 2012) with the same Quartet singing many of the same songs: each of those performances are completely different. Different nuances, slightly different tempo, and certainly variances in the emotional presence behind the song. I’ve heard the same song and arrangement go from playful to joyous to wistful and even  sometimes to edgy. He never just comes out on stage and does the exact thing he did yesterday; it’s always about that moment in time, in that city, in that hall, with that audience. With his enormous gifts as a singer and performer, he never “phones it in.” It’s always in the now. And today I learned from Dr. Langer that this way of living your life is as close as any of us can come to the fountain of youth.

I’m embedding the recording of Dr. Langer from Talk of the Nation. It’s a thirty minute program. There’s a very interesting piece at the very end (27:25) about how this applies especially to musicians and artists. If you’d like to know more about Dr. Langer’s work on mindfulness, please visit her website at www.ellenlanger.com.

For iPad and iPhone users, here’s the link to a non-Flash version. The rest of you can listen here. And again, Happy Birthday to Tony Bennett. Thanks for everything.

We loved this Reuter’s piece by Phil Pullella about Mr. Bennett’s feelings about performing in Italy.

We wanted to post the link to an interview that kd lang did recently in Australia in conjunction with her performance at Hamar Hall in Melbourne. This is a two part interview; she talks about Tony Bennett in the first part.