The song of the day for December 14, 2021, the first day of the Twelve Days of a Tony Bennett Christmas, is “White Christmas.”

“White Christmas” was written by Irving Berlin in 1940 and is one of America’s most beloved Christmas songs. In the not-often heard verse of the song, we hear that “the sun is shining, the grass is green, the orange and palm trees sway, there’s never been such a day in Beverly Hills, L.A. But it’s December the 24 …” And indeed, Irving Berlin was in Los Angeles when he wrote “White Christmas,” expressing that longing for a traditional back-home Christmas. Bing Crosby recorded the song in 1942 and completely dominated the music charts for weeks. Crosby’s single of “White Christmas” is the biggest-selling single record of all time, worldwide, with over 100-million copies.

Tony Bennett recorded “White Christmas” in 1987 for his album Bennett/Berlin, consisting of songs written by Irving Berlin. Dexter Gordon on tenor sax is featured on this recording.

“White Christmas,” as well as Bennett/Berlin is available on Apple Music. 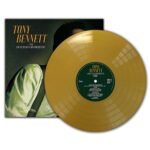 On Christmas Day, the 12th day of The Twelve Days of a Tony Bennett Christmas, the song of the day for Friday, December 25, 2020, is “A Child Is Born.”

“A Child Is Born” was written by Thad Jones, whose younger brother, Elvin, was a noted jazz drummer. Thad Jones was a member of the Count Basie Orchestra starting in 1954. He left the orchestra in 1963 to pursue a career as an arranger and studio trumpet player and later moved to Denmark. “A Child Is Born” is his best-known composition; the wonderful lyrics are by Alec Wilder.

Tony Bennett and Bill Evans recorded “A Child Is Born” in 1976 for their second album: Together Again, released in 1977.

A Child Is Born

“A Child Is Born,” as well as Together Again, is available from Apple Music.

On the 11th day of The Twelve Days of a Tony Bennett Christmas, the song of the day for Thursday, December 24, 2020, is “The Christmas Waltz.”

“A Christmas Waltz” was written in 1954 by Jule Styne and Sammy Cahn. They wrote it for Frank Sinatra, who recorded it on the B-side with “White Christmas.”

Listen to The Christmas Waltz on Spotify. Tony Bennett · Song · 2008.

“The Christmas Waltz,” as well as A Swingin’ Christmas, is available from Apple Music.

On the tenth day of The Twelve Days of a Tony Bennett Christmas, the song of the day for Wednesday, December 23, 2020, is “Christmas Time Is Here.”

“Christmas Time Is Here” was written by Vince Guaraldi and Lee Mendelson for the 1965 television special, A Charlie Brown Christmas, which is a perennial holiday favorite. This song has also been recorded by artists including Diana Krall, Anita Baker, Mel Tormé, and Mariah Carey.

Tony Bennett recorded “Christmas Time Is Here” with The Count Basie Big Band for his 2008 album A Swingin’ Christmas.

“Christmas Time Is Here,” as well as A Swingin’ Christmas, is available from Apple Music.