The Year of Tony Bennett honors the arranger Ralph Burns as our musical collaborator of the month for June 2017.

Ralph Burns was a jazz triple threat: a pianist, a composer and an arranger. He was born in Newton, Massachusetts on June 29, 1922 and died on November 21, 2001 in Los Angeles.

Burns said that he learned most of what he knew about jazz by transcribing the works of Count Basie, Benny Goodman and Duke Ellington. As a young musical student, he lived in a house with other young jazz players and that served as an introduction to greats including Nat King Cole and Art Tatum.

In 1940, Burns moved to New York and began working for Charlie Barnet. In 1944, he joined Woody Herman’s band and it was there he began to master his muscular jazz sound. By 1950, he was playing solo piano in the evenings and working during the day with artists including Billy Strayhorn and Ben Webster. During that period he began his work with Tony Bennett, starting in 1958 on Hometown, My Town.

By the 1960s, Burns seemed to be working everywhere. He arranged scores for Broadway musicals including Chicago, Funny Girl, No, No, Nanette, and Sweet Charity. He partnered with Bob Fosse on the film version of Cabaret, for which he won an Academy Award. He composed the scores for Fosse’s Lenny and Martin Scorsese’s New York, New York. He worked again with Bob Fosse on All That Jazz and other films including Urban Cowboy and Annie and continued working on Broadway as well.

This month we’ll be featuring the arrangements he did for Tony Bennett and I hope you’ll enjoy them I much as I do.

The musical collaborator of the month for May 2017 is Bill Evans.

William John Evans was born in Plainfield, New Jersey on August 16, 1929. He began playing the piano at a very young age when his older brother, Harry, began piano lessons around the age of five and Bill would sit at the piano and play everything he heard his brother play. Soon, both brothers were taking piano lessons. In those early years, he became a prodigious pianists and developed an excellent ability for sight-reading. He also took up violin, flute and piccolo as a youth, but dropped them to concentrate on piano.

Evans was first exposed to jazz around the age of 12 and listened to Harry James and Tommy Dorsey on the radio, while developing as a classical pianist. Soon, he was playing with local bands and extending his jazz technique. He followed his brother Harry to Southeastern Louisiana University on a flute scholarship and continued his piano studies. He graduated in 1950 with a Bachelor of Music and a Bachelor of Music Education. After college, he formed a jazz trio, but was unable to get the booking the group needed. He even did a three-month tour backing Billie Holiday. Soon, however, he was drafted and service in the Army from 1951 to 1954, playing in the Fifth U.S. Army Band. He also hosted a jazz program on the camp’s radio station.

After leaving the Army, Evans went to New York City and enrolled in post-graduate musical composition studies and the Mannes College of Music. He also performed throughout the metropolitan area. It was during that period that he met Helen Keane, who later became his agent and was with him for many years. In the later fifties, he met bassist Scott LaFaro, who joined his trio. Evans stayed busy doing studio work for albums let by artists including Charles Mingus, Tony Scott, Eddie Costa and Art Farmer. 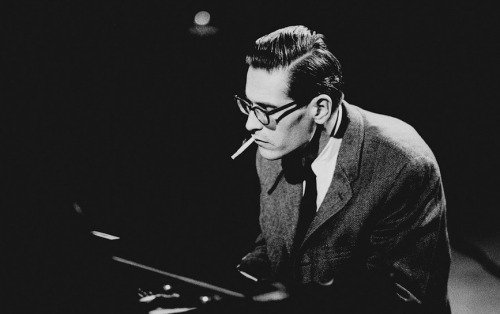 In April 1958, Evans joined the Miles Davis Sextet, with a schedule of many live performances as well as recordings with Davis. However, there was some tension in the group, with a white performer replacing an African-American pianist. He also continued session work. Late in the year, though, Evans suffered serious burnout, left the Davis sextet and sought psychiatric help, even wondering if he wanted to continue to be a pianist. He went to stay with his brother Harry, who was still living in Louisiana, and recovered from his period of doubt.

Miles Davis asked him to rejoin the sextet in 1959 for the recording of Kind Of Blue, which was then and still is one of the best-selling jazz albums. During those later years, Evans became addicted to heroin. Davis tried to help Evans with his addiction, but was unable to help.

After Kind of Blue, Evans formed one of the finest of his trios, with Scott LaFaro on bass and Paul Motian on drums. The work of this trio was a high point in Evan’s early career, and performed live and made several albums as well. In 1961, the trio recorded their legendary live album, Sunday at The Village Vanguard.

Ten days after the completion of the Village Vanguard sessions, Scott LaFaro died in an automobile accident. He was only 25 years old. Evans was devastated by LaFaro’s death and did not record or appear in public for several months. He gradually returned to work, though his dependence on heroin became more pronounced. In spite of his busy schedule and income from recordings, he was always in debt and borrowing money to feed his habit.

It took Evans until 1966 to find a bassist that could begin to take LaFaro’s place, Eddie Gomez, who played with Evans for 11 years. A new drummer, Marty Morell, joined the trio and remained until 1975, bring a long period of stability; in fact, Evans had even kicked the heroin, at least for a while. He continued to be very successful, with a long series of highly regarded (and Grammy-winning) albums, though his drug use became more of a personal problem for him.

During that period, he made his two albums with Tony Bennett: The Tony Bennett/Bill Evans Album and Together again.

In 1979, Evans’ brother Harry committed suicide. The brothers were very close and Bill was devastated by the news. In August 1979, he recorded his last studio album, We Will Meet Again, featuring a composition by his brother Harry. This album won a posthumous Grammy award for Evans.

In addition to his heroin addition, Evans became addicted to cocaine, and progressed to injecting himself with that drug. On September 15, 1980, he developed severe stomach pains and was taken to the hospital, where he died that afternoon. The cause of the death was a combination of a peptic ulcer, cirrhosis, pneumonia and untreated hepatitis. His friend, lyricist Gene Lees, described Evans’ struggle with drugs as “the longest suicide in history.”

He left behind an extraordinary body of work and still influences jazz, especially jazz piano, to this day.

During the recording sessions for Together Again, Evans kept playing his own arrangement of the theme from The Bad and The Beautiful, the 1952 film starring Kirk Douglas and Lana Turner. Tony Bennett liked it so much, he insisted on putting in on their album. We leave you with that recording.

The Year of Tony Bennett is proud to name arranger Marion Evans as the collaborator of the month for February 2017.

Marion Evans, a native of Alabama, started his musical career at Auburn University, playing the trumpet in what was then the best college dance band in America. He interrupted his education to serve as a United States Marine in World War II, stationed in the Pacific Theater.

He returned to Auburn to continue his education in engineering after the war. At the same time, a friend sent some of his old college arrangements to Tex Beneke, who had taken over as the lead of the Glenn Miller Orchestra, following Miller’s death. These arrangements led to a job offer with the band. He moved to New York and enrolled at Juilliard, using the same GI Bill that sent Tony Bennett to the Actor’s Studio.

His career took off and in the 1950s and 1960s, he wrote arrangements for Tommy Dorsey, Percy Faith and Count Basie, among many others. He orchestrated the music for one of my favorite films, Some Like It Hot, Broadway shows, television and many vocalists, including Eydie Gorme’s “Blame It On The Bossa Nova.”

Evans’ first association was with Tony Bennett for Bennett’s 1967 album Tony Makes It Happen!, which he arranged and conducted. They were reunited in 2011, when Bennett asked him to do a last-minute orchestration of “The Lady Is A Tramp” for Lady Gaga and Bennett to record for Duets II. He’s continued to work for Bennett, including work on Cheek To Cheek as well as other projects.

We’ll be playing arrangements by Mr. Evans throughout the month. I hope you enjoy them as much as I do!

If you’d like to read more about Marion Evans …

The Associated Musicians of Greater New York, Local 802, honored Marion Evans in September 2016 by playing some of his great arrangements in concert with the 48th Street Big Band. You can read about the concert in their newsletter, Allegro.

Marion and his wife Terri live in Bucks County, Pennsylvania. These links are stories about Marion from local newspapers.

“The arranger behind the Grammy-winning Tony Bennett/Lady Gaga album talks recording then and now,” also from The Midweek Wire.

Last year The Year of Tony Bennett recognized some of the great songwriters who wrote the songs that Tony Bennett so often sings.

This year we will be honoring the collaborators who have helped make it all possible: arrangers, duet partners and more. As Mr. Bennett himself has said:

Give credit to those who work so hard to make your performance or project happen.

This year, we’ll be giving some credit.