The album of the month for March, 2015 is Tony Sings For Two. 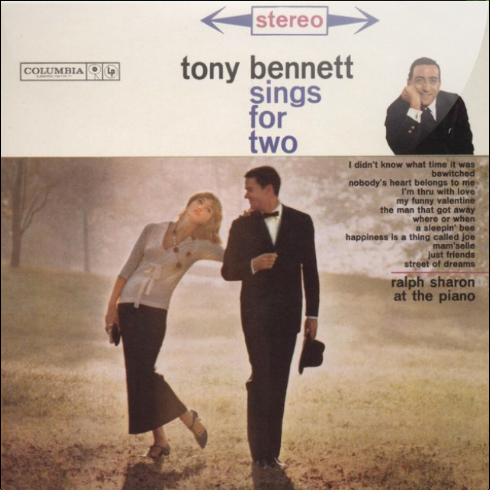 Tony Sings For Two was released by Columbia Records on February 6, 1961.

This album is particular favorite of this author. It’s the album I find myself turning to often when feeling, like one of the readers of this blog once typed into Google as a search string: “I just want to hear Tony Bennett and nobody else right now.”

On October 28, 1959, Tony Bennett and Ralph Sharon walked into the CBS 30th Street Studio with a lot of sheet music and recorded one of Tony Bennett’s greatest and most timeless albums. Bennett tells the story in The Good Life:

I always wanted to be unpredictable, and so for my next project, I decided to go in the opposite direction from the big orchestral albums I’d been doing lately and cut an intimate piano-vocal album with Ralph Sharon. We booked time in the studio and pored over music books, trying one tune after another. The arrangements were spontaneous and we finished each song in one or two takes. In one afternoon, we laid down sixteen tunes — which must be some kind of record — twelve of which made it onto the album, which became 1961’s Tony Sings For Two. Mitch Miller showed up at the start of these sessions, furious that I was really going through with it. When he saw there was no dissuading me, he turned to Frank Laico and say, “I’m leaving, I can’t support this.” Tony Sings For Two turned out to be one of my finest records ever.

In an age of the big orchestral albums, what I call the Melanchrino Strings Effect, it was an extraordinary album to release. The selection of songs was, and remains, perfect — all great songs from the American Songbook. Great songs, great vocals, great piano. I hope you’ll enjoy this exploration as much I plan to.