The album of the month for February, 2015 is If I Ruled The World: Songs For The Jet Set. 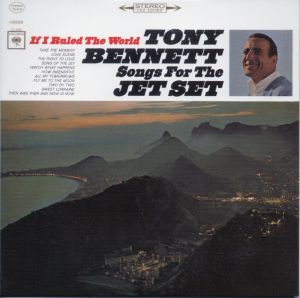 If I Ruled The World: Songs For The Jet Set was released on April 19, 1965. Bennett dedicated the album to Nat “King” Cole, who died just a month prior to the release of the album.

This album is one of Tony Bennett’s great albums from the middle of the 1960s, just before the arrival of Clive Davis at Columbia and the drastic changes to the label that followed.

For this album, Bennett worked with arranger Don Costa, who also arranged for Sinatra on occasion. The album’s concept is traveling: from Rio to Harlem and even to the moon, with stops in between. As we examine the album together this month, I suspect that we’ll all agree that If I Ruled The World: Songs For The Jet Set contains some of his finest recordings and excellent musicians, including Al Cohn and Bobby Hackett in addition to the Ralph Sharon Trio.

So, let’s get out our passports and take the world tour with Tony Bennett.