The Year of Tony Bennett is happy to add a new feature for our readers: the Album of the Month. Each month, we will choose one of Tony’s albums and explore that album in some detail over the month.

Our first album of the month is Tony’s first full-length album: Cloud 7, which was released on February 7, 1955. 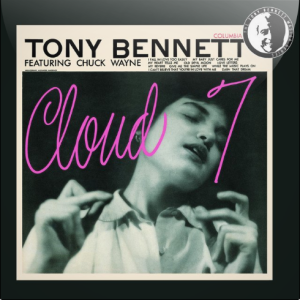 Having signed with Columbia in 1950, Bennett had turned out a string of very popular songs: “Boulevard of Broken Dreams,” “Sing You Sinners,” “Cold, Cold Heart” and “Because of You.” But for his first album, he created a wonderful jazz album that remains beloved to this day.

As a first album by a young singer (Bennett was not even 30 when he made Cloud 7), it’s a remarkable album that defined Bennett not only as vastly popular singer, but a jazz artist with impeccable taste and true vision of his own artistry.

You can read more about Cloud 7 on The Interactive Tony Bennett Discography, where you can view a list of the songs on the album, read the liner notes and follow links to learn more about the recording sessions and details about each song.

Over the month, we’ll also be featuring each of the songs on the album as songs of the day.