On the third day of a Tony Bennett Christmas, Monday, December 16, 2013, the song of the day is “The Christmas Waltz.”

“The Christmas Waltz” was written in 1954 by Jule Styne with lyrics by Sammy Cahn. It was first recorded by Frank Sinatra as the B-side to “White Christmas.” The song has gained great popularity with jazz and cabaret singers in addition to Tony Bennett, with recordings by Mel Tormé, Nancy Wilson, Anita O’Day, Rosemary Clooney, Peggy Lee, Margaret Whiting, Kristen Chenoweth and Harry Connick, Jr. 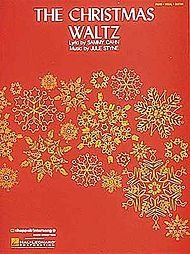 Today’s song is from Tony Bennett’s 2008 album, A Swingin’ Christmas, which features The Count Basie Big Band. Bennett’s quartet for this album included Monty Alexander on piano, Gray Sargent on guitar, Paul Langosch on bass and Harold Jones on drums.

http://open.spotify.com/track/08BhfyKUXxZrnyHrDavNHP
“The Christmas Waltz,” as well as A Swingin’ Christmas, is available from iTunes and Amazon.