“I’ll Be Seeing You” was written in 1938 by Sammy Fain, with lyrics by Irving Kahal. It was used for the short-lived Broadway musical Right This Way. This song became quite popular during World War II, as it spoke so eloquently to the feelings of soldiers serving overseas and the people left behind at home. Bing Crosby recorded this song in 1944 and Frank Sinatra recorded it several times. Other notable recordings include those by Billie Holiday, Mel Tormé, Peggy Lee, Rosemary Clooney and Sarah Vaughan.

Tony Bennett recorded this song in 1992 for his album Perfectly Frank, which consists of songs sung and associated with Frank Sinatra. The album won the 1993 Grammy Award for Best Traditional Pop Vocal Performance. I won’t argue with the Grammy voters; it’s an extraordinary album. The album was arranged and conducted by Robert Farnon. The Ralph Sharon Trio, with Paul Langosch on bass and Joe LaBarbera on drums, provide fantastic accompaniment. Additionally, Frank Laico, who recorded most of Tony Bennett’s song during the 1950s and 1960s came out of retirement to engineer the album. Perfectly Frank is, frankly, pretty near perfect.

http://open.spotify.com/track/0uKpTpHTrGzVtrWvlZq2Io
“I’ll Be Seeing You,” as well as the album Perfectly Frank, is available from iTunes.

Tony Bennett recorded this song in 1959 with Count Basie on their terrific swinging album Basie/Bennett. Please visit our sister site, The Interactive Tony Bennett Discography, for more information about Basie/Bennett, including session information.

http://open.spotify.com/track/2QMkgDxADnazpGUDkipfaK
“Are You Havin’ Any Fun?,” as well as the entire Basie/Bennett album, is available from iTunes. 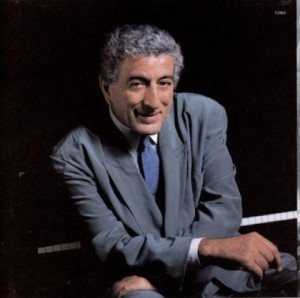 About Are You Havin’ Any Fun?

This song was written for George White’s Scandals of 1939, with music by Sammy Fain and lyrics by Jack Yellen.

We feature Are You Havin’ Any Fun? as we prepare for Viva Duets, which contains a duet of this song with Dani Martín. Today’s version is from the recently remastered album with Count Basie: Strike Up the Band!, from the 1959 Basie/Bennett album. Mr. Bennett also sang the song as duet with Elvis Costello on the original 2006 Duets: An American Classic.

William James Basie was born on August 21, 1904. In honor of Count Basie, the Song of the Day for this day Are You Having Any Fun?

About Are You Having Any Fun?

The song was written by Sammy Fain and Jack Yellen. In addition to Tony Bennett and Count Basie, the song has been recorded by Elaine Stritch, July Garland, and Tommy Dorsey.

This version is from the second album that Tony did with Count Basie: Bennett & Basie Strike Up The Band, released in 1959 on Basie’s Roulette label.  This album was digitally remastered and released in 2012. It sounds better than ever.

And, as a birthday treat, we also include Poor Little Rich Girl, from the same album: