“Day Dream” was written in 1941 by Billy Strayhorn and Duke Ellington, with lyrics by John LaTouche. It was one of the first songs Strayhorn wrote after he moved to New York and the first recording was made by Johnny Hodges with Strayhorn on piano. Duke Ellington included it on his album for Billy … And His Mother Called Him Bill, made shortly after Strayhorn’s death.

Today’s version “Day Dream” is from a group of sessions held in May 1964 with Bennett, Stan Getz (tenor sax), Ron Carter (bass), Elvin Jones (drums), and Herbie Hancock (piano).  Up until 2011, only one song from these sessions had ever been released: “Danny Boy,” which was released on Bennett’s 1987 compilation album Jazz. The remaining songs from these sessions were, thankfully, included in the 2011 Tony Bennett Complete Collection and are now available on iTunes. All of the songs with these musicians are exceptional.

“Day Dream,” as well as all of the songs on Rarities, Outtakes & Other Delights, Volume 1, is available from iTunes. 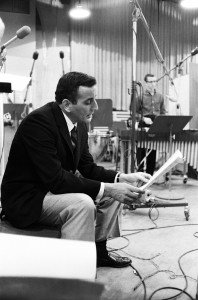 About Out Of This World

This song was written by Harold Arlen and Johnny Mercer for the 1945 film of the same name. The song was introduced in the movie by Bing Crosby, though Mr. Crosby dubbed the voice of the main character played by Eddie Bracken.

It became a jazz standard and has been recorded by John Coltrane, Ella Fitzgerald, and Mel Tormé, among others.

This version was recorded by Tony Bennett in 1964 with an extraordinary group of jazz musicians: Stan Getz (tenor saxophone), Ron Carter (bass), Herbie Hancock (piano) and Elvin Jones (drums). Several other songs were recorded in the same session and several are included on this Rarities disc, including Day Dream, Danny Boy, and Just Friends. The compilation album Jazz, released in 1987 by Columbia Records, contains these and other jazz recordings made by Mr. Bennett, from the late 1950s and 1960s.

Out of This World

Out Of This World, as well as Rarities, Outtakes & Other Delights: Volume 1, is available at iTunes.

Jazz is available from Amazon and other CD retailers. 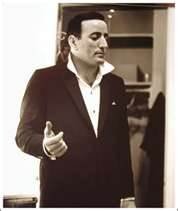 The lyrics for Danny Boy were written in 1913 by Frederic Weatherly, a London songwriter and lawyer. It is sung to the folk song Londonderry Air.

Tony Bennett recorded Danny Boy in 1964 with an incredible set of jazz musicians: Herbie Hancock (piano), Stan Getz (tenor saxophone), Ron Carter (bass) and Elvin Jones (drums). Other songs from those sessions are also available on the Rarities, Outtakes and Other Delights, Vol. 1.

This is an extraordinary recording of this song.

Danny Boy, as well as the full Rarities, Outtakes and Other Delights, Vol. 1, is available from iTunes.