About They All Laughed

Last evening, my co-blogger Lesley texted me to tell to turn on NPR for Fresh Air. Michael Feinstein was on, talking about his new book, The Gershwins and Me: A Personal History in Twelve Songs.

Towards the end of the interview, he talked about how much Ira loved They All Laughed:

There used to be a famous magazine and newspaper ad that showed a drawing of a man sitting at the piano, and it said above it, ‘They all laughed when I sat down to play the piano.’ And it was an advertisement for a quickie course in how to learn to play the piano, and that phrase, ‘they all laughed,’ was something that stuck in Ira’s head. And he later used it as the inspiration for a love song, and when he played the song for George S. Kaufman — Kaufman hated love songs — and at first Kaufman liked the idea that the lyric was something that was not in reference to romance, and then when it got to the bridge, ‘They laughed at me wanting you,’ he said, ‘Oh, don’t tell me this is another romantic song.’ But that was Ira, who was always trying to find a way of expressing love without saying ‘I love you,’ and that’s why he was so proud of “They All Laughed”.

The Fresh Air interview with Michael Feinstein can be heard here.

They All Laughed was written for the 1937 film, Shall We Dance, and was introduced by Ginger Rogers.

We’re driving the blues away with the Song of the Day for September 28, 2012: Shall We Dance.

About Shall We Dance

Shall We Dance was written by George and Ira Gershwin for the 1937 film of the same name, with Fred Astaire and Ginger Rogers. The song was introduced by Fred Astaire. It’s a great number and we’re happy to present the scene from the film:

Tony Bennett recorded Shall We Dance for his tribute album to Fred Astaire, Steppin’ Out, released in 1993. 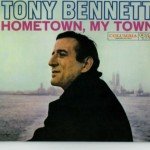 About Love Is Here to Stay

Written by George and Ira Gershwin, Love Is Here to Stay is popular jazz and popular song standard. It was written for the 1938 movie The Goldwyn Follies, which was released after George Gershwin’s untimely death. Originally, the song was called It’s Here to Stay, but later changed to  Our Love Is Here to Stay. However, it was finally published as Love Is Here to Stay. The song was the main theme for the 1955 film American in Paris. It has been sung by numerous artists, including Frank Sinatra, Ella Fitzgerald, Billie Holiday, Blossom Dearie, and even Barry Manilow and Brian Wilson.

This version is from Tony Bennett’s 1959 album, Hometown, My Town. The album is an ode to New York and is among Mr. Bennett’s best. It is certainly a favorite at The Year of Tony Bennett.

The Song of the Day for July 25, 2012 is Strike Up the Band by George and Ira Gershwin from the recently remastered release of Bennett & Basie Strike Up the Band. Recorded in January 1958. I love Tony Bennett playing with Count Basie and I hope you do too.