“Just In Time” is from the hit 1956 musical Bells Are Ringing, with music by Jule Styne with book and lyrics by Adolph Green and Betty Comden. Starring Judy Holliday, Bells Are Ringing is about a woman who works at an answering service (for those of you younger than this author, answering services are how people got their messages before they invented answering machines, much less voice mail) and the clients she worked with, one of whom she becomes involved with. “The Party’s Over” is another of the great hits from Bells Are Ringing. 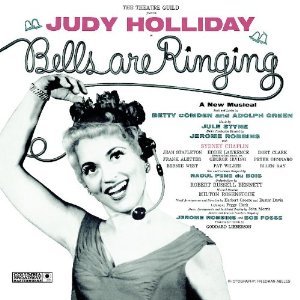 Tony Bennett recorded “Just In Time” as a single in 1956. He tells this story in his autobiography, The Good Life:

In 1956, Jule Styne came to me with “Just In Time,” the big song from his forthcoming show, Bells Are Ringing. The Columbia people told him, “If you want Tony to record a single of ‘Just In Time.’ you’ll have to let Columbia Records have the cast album.” That was standard policy for Columbia. Jule said, “I want Tony. No one else!” So that was that. I recorded “Just In Time” in September. I had a hit with the song and the show opened at the Shubert Theater on November 29.

Jule Styne was wise to insist on Tony Bennett; the recording is really wonderful.