In recognition of Harold Arlen Week and Valentine’s Day, Last Night When We Were Young is the song of the day for Thursday, February 14, 2013.

About Last Night When We Were Young

This wonderful song was written in 1935 by Harold Arlen with lyrics by E.Y. (Yip) Harburg. When Arlen first wrote this song, he played it for George Gershwin, who found it too complicated; Jerome Kern found it too esoteric (Edward Jablonski, Harold Arlen: Rhythm, Rainbows and Blues). Alec Wilder, on the other hand, said that “This is a most remarkable and beautiful song. It is one that goes far beyond the boundaries of popular music. For me, it’s a concert song without a trace of trying to be.” Yip Harburg has said that “the juxtaposition those two phrases is almost a whole world of philosophy.” 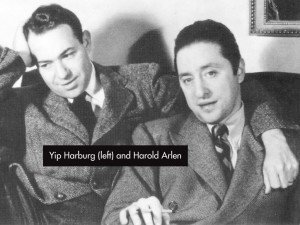 It was one of Arlen’s favorite songs and with the excellent lyrics by Yip Harburg, it became a standard for major singers. It was a favorite of both Judy Garland and Frank Sinatra.

Tony Bennett first recorded Last Night When We Were Young in 1959 for To My Wonderful One. Today’s version, however, comes from his 1992 Perfectly Frank. This album is, for this writer, as perfect as any human endeavor can be. Tony Bennett’s version is perfectly phrased and perfectly sung; it is a true masterpiece.