“Darn That Dream” was written by Jimmy Van Heusen, with lyrics by Eddie DeLange, for the short-lived Broadway musical Swingin’ The Dream, which opened in 1939.

Swingin’ The Dream was a musical adaptation of Shakespeare’s A Midsummer Night’s Dream, with an African-American cast including Butterfly McQueen, Louis Armstrong, Bill Bailey, Moms Mabley and the Dandridge Sisters. Armstrong played the role of Bottom and introduced today’s song. Alas, it only ran for 13 performances. 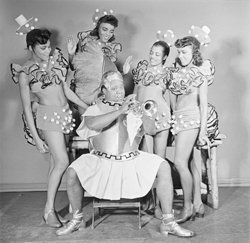 Tony Bennett recorded “Darn That Dream” for his first full album, Cloud 7, released in 1955. The song was arranged by Chuck Wayne, who also played guitar for the album. You can read more about Cloud 7 on The Interactive Tony Bennett Discography.

http://open.spotify.com/track/49qnUsYpaH3zLa20TCSYOy
“Darn That Dream,” as well as the album Cloud 7, is available from iTunes.